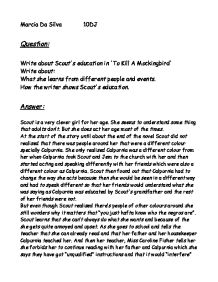 Marcia Da Silva 10DJ Question: Write about Scout's education in 'To Kill A Mockingbird' Write about: What she learns from different people and events. How the writer shows Scout's education. Answer: Scout is a very clever girl for her age. She seems to understand some thing that adults don't. But she does act her age most of the times. At the start of the story until about the end of the novel Scout did not realised that there was people around her that were a different colour specially Calpurnia. She only realised Calpurnia was a different colour from her when Calpurnia took Scout and Jem to the church with her and then started acting and speaking differently with her friends which were also a different colour as Calpurnia. ...read more.

Scout learns that she can't always do what she wants and because of the she gets quite annoyed and upset. As she goes to school and tells the teacher that she can already read and that her father and her housekeeper Calpurnia teached her. And then her teacher, Miss Caroline Fisher tells her she forbids her to continue reading with her father and Calpurnia which she says they have got "unqualified" instructions and that it would "interfere" with her education. As she wants all her students to follow a system instead as teaching them as individuals. But then Calpurnia tells Scout that, people "got to want to learn themselves, and when they don't want to learn there's nothing you can do but keep your mouth shut or learn their language." ...read more.

At times like this Scout says that she thought her " father, who hated guns and had never been to any wars, was the bravest man who ever lived." She was very surprised of her father when he did that. The writer shows that people in Maycomb didn't really cared about education that much as not many people were educated there. Even though she doesn't really talk about education that much. What she says about education is all about Scout, Jem, Atticus, Calpurnia and the uneducated coloured people. She shows that Scout likes to learn new things when she feels like it. And always asks if she doesn't understand a word or what the person means. She likes to be well informed especially about things that she never heard or noticed before. The writer also modeled Scout with herself. ...read more.