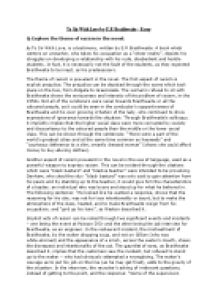 To Sir With Love by E.R Braithwaite - Exploring Themes - Racism

Transfer-Encoding: chunked ﻿To Sir With Love by E.R Braithwaite - Essay Q: Explore the theme of racism in the novel. A: To Sir With Love, is a testimony, written by E.R Braithwaite. A book which centers on a teacher, who takes his occupation as a ?sheer reality?, depicts his struggles on developing a relationship with his rude, disobedient and hostile students. In fact, it is necessarily not the fault of the students, as they expected Braithwaite to be inept, as his predecessors. The theme of racism is prevalent in the novel. The first aspect of racism is explicit prejudice. The prejudice can be depicted through the scene which took place on the bus, from Aldgate to Greenslade. The woman?s refusal to sit with Braithwaite shows the seriousness and intensity of the problem of racism, in the 1950s. Not all of the Londoners were racial towards Braithwaite or all the coloured people, as it could be seen in the conductor?s supportiveness of Braithwaite and his ever growing irritation of the lady, who continued to show expressions of ignorance towards the situation. Through Braithwaite?s soliloquy, it implicitly implies that the higher social class were more corrupted by society and discourteous to the coloured people than the middle or the lower social class. This can be shown through the sentences: ?There were a part of the world?s greatest cities and at the same time common as hayseeds? and ?courteous deference to a slim, smartly dressed woman? (shows she could afford money to buy alluring clothes). ...read more.

Braithwaite who experiences racism implicitly, explicitly and verbally, is indignant. This can be noted in his soliloquy lines: ?What a superior bitch!? (when the lady refused to sit next to him) and ?I was always subject to explosive anger, but for years I have been making a determined attempt to exercise control of my temper? (when Weston called him: Black sheep). However, in later phases of the story, the acts of racism, he endures are converted from anger to hurt. This can be seen in the scene, where the class was discussing on whether Potter should fret for his action ? disrespecting and cussing at a teacher. Braithwaite said Potter should definitely ask for forgiveness, whilst the rest of the class said that Potter was right in cussing, as because of the teacher (Mr. Bell), Buckley, got hurt. Seales, a student in Braithwaite?s class, says: ?Easy for you to say, Sir, you have never experienced a time where someone pushed you around? and Braithwaite responds to Seales: ?I have been pushed around. I have been hurt, really hurt. I sometimes awoke to painful, quick remembering?? This implies that all the acts, in which he had easily ignored, or overlooked, at that time, struck a chord on him, in the long run; un-noticed. Braithwaite also is physically hurt, in one scene, where he was violently sick (through regurgitation), after the interview, and this could be seen in the lines: ?I was violently sick?. ...read more.

Racism has not only had bad effects on the lives of the people discussed in the story. It is because of racism, Braithwaite landed the job as a Teacher, and was able to transform the lives of the students, who were free disciples into people who could function and live in the world, without conflict or disagreement. Braithwaite knew that schoolbook teachings could not be related and with no relation to their lives, it was useless, so he discussed with them freely about disclosed topics like relationships, and through the ignorance of the students? taunts towards him and the careful teachings, and his knowledge of knowing their background ? that they were students who were poor, were surrounded by social vermin, prostitutes and bad influences and went to bed, sometimes hungry, he was able to win the hearts of all his students. The sentence: ?Some of them grew strong within ? They are all now willing to learn. They may turn out to be decent folk? shows how extensively Braithwaite evolved their character, and this sets in contrast to Weston?s opinion about them: ?blithe spirits?. In conclusion, racism was regarded as a significant and very present issue in the 1950s, than it is today, in London. Racism took place everywhere. This restricted careers and diminished dreams of all the coloured people inhabiting the city. To Sir With Love, is an autobiographical text, which truly reflects on the racial atmosphere of cosmopolitan London. ------------------------------------------------------------------------------------------ ...read more.