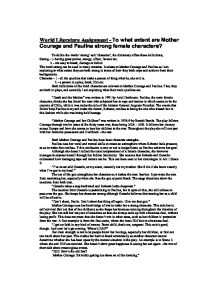 To what extent are Mother Courage and Paulina strong female characters?

World Literature Assignment - To what extent are Mother Courage and Paulina strong female characters? To define the words 'strong' and 'character', the dictionary offers these definitions; Strong - 1- having great power, energy, effect, flavour etc. 2 - not easy to break, damage or defect. The word strong can be used in many contexts. It relates to Mother Courage and Paulina as I am exploring to what extent they are both strong in terms of how they both cope and achieve from their backgrounds. Character - 1 - all the qualities that make a person of thing what he, she or it is. 2 - a person in a play, book, film etc. Both definitions of the word character are relevant to Mother Courage and Paulina. First, they are both in plays, and secondly I am exploring what their main qualities are. "Death and the Maiden" was written in 1991 by Ariel Dorfmann. Paulina, the main female character, thinks she has found the man who subjected her to rape and torture in which seems to be the country of Chile, while it was under the rule of the dictator General Augusto Pinochet. The events that follow help Paulina to try and make the doctor, Roberto, confess to being the one who treated her in this fashion while she was being held hostage. ...read more.

We can see that she has an unstable mind form the first scene. Her uneasiness shows that she is not comfortable when around strangers. This is heightened by the use of the gun. "She hurriedly stands up.......She goes to the sideboard, takes out a gun," She loses her temper easily throughout the play. This is especially noticeable when the male roles do not follow her orders. Although she loses her temper, she hardly ever raises her voice. This is because she is trying to show the men that she is keeping calm, although her actions tell differently. The clearest example is when she shoots the gun as Gerardo goes to untie Roberto. She shows a huge loss in temper, as it could have resulted in death. When her husband, Gerardo, tries to talk some sense into Paulina, she is too self motivated to take into account any of his advice. "Gerardo: Are you deaf? I just told you I'm going to have to resign. Paulina: I don't see why. Gerardo: You don't see why, but the rest of the country will..." Mother Courage also has character weaknesses. She doesn't protect her children enough, due to her pride in her business. This in effect causes her to lose all of her children to the war. First she loses Eilif due to a business deal, then he is later killed by his heroicness. ...read more.

Paulina is a strong character in accordance to her background. Many people who have been rape and tortured may not have reacted so severely, but may have hidden away from their feelings. She lets her feelings known to Gerardo and Roberto, but always manages to stay in control of them both. She aims what she wants to achieve - a confession from someone admitting that they were the one who subjected her to her rape and torture. Mother Courage is also a strong character, apart from she loses all of her children to the war. She has lived for a long time and has been to many wars but in this war the loss of her children is what separates them form the rest. Although this happens, she manages to carry on and keep going with her business and her livelihood - the cart. The cart is never harmed throughout the play, although all of her children do die. Mother Courage's strength is supported by her lack of showing her emotion at losing her children. Her children themselves help to strengthen her character, as they provide her necessary backup for helping with business deals and getting out of 'sticky' situations. We see the love her children have for her, as they all risk their lives for her. Overall, I would say that Paulina is the strongest character of manipulating other, but Mother Courage is the strongest character in emotion. ?? ?? ?? ?? ...read more.