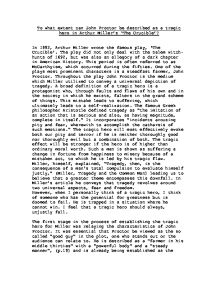 To what extent can John Proctor be described as a tragic hero in Arthur Miller's 'The Crucible'? In 1952, Arthur Miller wrote the famous play, 'The Crucible'. The play did not only deal with the Salem witch-hunts of 1692, but was also an allegory of a dark chapter in American History. This period is often referred to as McCarthyism, which occurred during the fifties. One of the plays most prominent characters is a steadfast farmer, John Proctor. Throughout the play John Proctor is the medium which Miller utilized to convey a universal depiction of tragedy. A broad definition of a tragic hero is a protagonist who, through faults and flaws of his own and in the society in which he exists, falters in the grand scheme of things. This mistake leads to suffering, which ultimately leads to a self-realization. The famous Greek philosopher Aristotle defined tragedy as "the imitation of an action that is serious and also, as having magnitude, complete in itself." It incorporates "incidents arousing pity and fear, wherewith to accomplish the catharsis of such emotions." The tragic hero will most effectively evoke both our pity and terror if he is neither thoroughly good nor thoroughly evil but a combination of both. The tragic effect will be stronger if the hero is of higher than ordinary moral worth. Such a man is shown as suffering a change in fortune from happiness to misery because of a mistaken act, to which he is led by his tragic flaw. Miller, himself, explained, "Tragedy, then, is the consequence of a man's total compulsion to evaluate himself justly," (Miller, Tragedy and the Common Man) ...read more.

Subsequently, from such rumors came the accusations. It was the accusations that proved most costly. People turned against each other saving themselves by accusing their neighbours. All of these consequences sprouted from fear in the hearts and minds of the people of Salem. Fear, however, only contributed to this tragedy. John Proctor's freedom within was the other half that completes the equation. It was this freedom that resulted in his mistakes, his flaws. Proctor chose to have relations, outside of his marriage to Elizabeth with Abigail. In Act Two, John makes a determined effort to please Elizabeth. He kisses her perfunctorily; he lies in saying that her cooking is well-seasoned 'It's well seasoned' (pg.42) showing the strain in their relationship. Like all men Proctor had his temptations yet his freedom allowed him to give in to them. Through his own freedom John "lusted with the girl" and went "against the law of God and Salem"(Murray, 46, - a professor of Greek mythology at Oxford university) Freedom also existed in John's choice to not attend Church. It was this choice that also contributed to his downfall, for it did not put him in the best standings with the townspeople. The fear in society and the freedom of John Proctor both complement each other in that balance that Miller spoke of. Tragedy comes from what the protagonist can, as well as cannot control. This evidence clearly holds true to Miller's definition of tragedy. Their then, is no doubt that the Crucible is a tragedy in Miller's eyes, He also says in his book 'Tragedy and the Common Man' that 'a tragedy must, without question, have a tragic hero present'. ...read more.

"I think the tragic feeling is evoked in us when we are in the presence of a character who is ready to lay down his life, if need be- to secure one thing- his sense of personal dignity."(Miller) Miller's definition of tragedy is a clear cut example of Proctor's actions in "The Crucible." Proctor realizes that his confession to these people violated his freedom. He learned that we need to answer to God and God only for forgiveness. The confession revoked Proctor's dignity and his freedom. Miller says, "Tragedy enlightens... in that it points the heroic finger at the enemy of man's freedom." Proctor sees this and points a heroic finger at those people who tried to take his freedom. In conclusion, I think it is a reasonable assumption to say that Proctor can be perceived as a tragic hero. He fits the classic Greek definition of a tragic hero. His actions also correspond with Arthur Miller's perception of a tragic Hero. However the outcome of the question posed, is based entirely on the readers view of what qualities a tragic hero should posses. In my opinion, looking at all the points raised, I feel that Proctor does fit my perception of a tragic hero. He most certainly was doomed to fail as soon as he set out to clear Elizabeth's name. I think that Miller definitely intended Proctor to exist as a tragic hero. He fits no description better than that of Miller's, regarding the qualities a tragic hero should posses. He also corresponds with Aristotle's definition of a tragic hero, he has the fatal floor that the philosopher speaks of, he does evoke pity, and his downfall is ultimately the result of his tragic floor. Edward Fry 10W1 2766 ...read more.