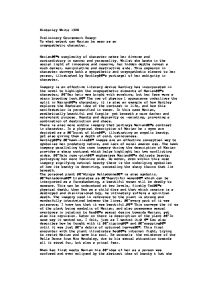 To what extent can Marian be seen as an unsympathetic character?

Kimberley White 13PN Preliminary Coursework Essay: To what extent can Marian be seen as an unsympathetic character. Marian�(tm)s complexity of character makes her diverse and contradictory in manner and personality. Whilst she basks in the social light of innocence and reserve, her hidden depths reveal a much darker, manipulative and destructive side. This oxymoron in character conveys both a sympathetic and unsympathetic element to her person, illustrated by Hartley�(tm)s portrayal of her ambiguity in character. Imagery is an effective literary device Hartley has incorporated in the novel to highlight the unsympathetic elements of Marian�(tm)s character, ?Her hair was bright with sunshine, but her face wore a stern brooding look.�(tm) The use of physical appearance underlines the split in Marian�(tm)s character, it is also an example of how Hartley explores the Keatsian idea of the contrast in life, and how this manifestation is personified in women. In this case Marian, aesthetically beautiful and fragile yet beneath a more darker and malevolent purpose. Beauty and depravity co-existing, provoking a combination of destruction and chaos. There is also more subtle imagery that portrays Marian�(tm)s contrast in character. In a physical description of Marian her eyes are depicted as a ?burst of blue�(tm), illustrating an angelic beauty, yet also giving them a depth of cold, callousness. Hartley�(tm)s ?hawk-like�(tm) images are an effective conceptual way to symbolise her predatory nature, and lack of moral awareness. The hawk imagery paralleling the rose imagery during the description of Marian provides a sharp contrast which helps highlight her two conflicting sides. ?Pale rose-pink�(tm) emphasises Marian�(tm)s delicate beauty, portraying her more feminine side. However, even within this rose imagery signifying natural beauty there is the underlying symbolism of how its beauty is deceiving, concealing the sharp thorns that lie beneath. The poisoned plant ?Atropa Belladonna�(tm) is also symbolic. ?Belladonna�(tm) translates as ?Beautiful woman�(tm) which can be interpreted as a foreshadowing, a beautiful woman will be deadly to someone. ...read more.

and his ?silly scruples�(tm), conveying the idea that she was the one that made him overcome his morals, she was the seducer. These seem very harsh statements, lacking all emotion. What she neglects to realise is that he only killed himself because he loved her so much he could not bear to live without her. She on the other hand, it is clear, did not reciprocate this vow, showing a very cold, uncaring characteristic. Marian displays duplicity in character when she socialises with Trimingham as well. Around her mother she is flirtatious and sociable towards Hugh, however, when her mother is not present she is inhospitable and aloof with him. This illustrates her deceptive and manipulative power. ?Tell him I�(tm)ll sing if he will sing?.. ?She wore a wreath of roses.? This is a cruel request as she knows Hugh doesn�(tm)t sing, the death imagery used in the title of the song condemns their relationship on a symbolic level, the response is said to come as ?a blow�(tm) to Trimingham. Trimingham lives up to his aristocratic upbringing that dictates ?nothing is ever a lady�(tm)s fault�(tm) and is faithful and loyal to Marian until the end. It seems cruel and unsympathetic of Marian to take advantage of Hugh�(tm)s good nature. It might also be relevant to comment that the tragedy of the ?Go-between�(tm) depends on the book being set in a time when there was a more rigid class structure than today. The tragedy occurs partly because it is set in a time when women from monied classes did not work for their living. Thus Marian never really considers Ted viable as a husband because she does not want to give up the privileges of her social status and has no profession to support her, showing a very materialistic side to Marian, and portraying the idea that although she may have loved Ted, it just wasn�(tm)t enough. ...read more.

Time has not taught her the lessons she should have learnt back in her youth. However, critics have also argued that Hartley establishes a theme of forgiveness and reconciliation in the final lines. Whilst the epilogue evokes sympathy in the reader for Marian, there is little remorse or sympathy shown by Marian herself, she never apologises to Leo. However, I shall conclude with how Hartley begins, ?The past is a foreign country, they do things differently there.�(tm) This statement epitomises a central idea; how can we possibly judge, that which we do not understand? The historical and social context in which the novel is set is so apart from the world where the reader is accustomed, it is hard to comprehend what life was like in such a socially orientated era. Portrayed as malevolent and scheming, an evil hidden behind an exterior of beauty and supremacy, it is perceivable she is a very unsympathetic character. Her treatment of those she is closest to, her apparent coldness towards Ted�(tm)s death, and her inability to recognise her own responsibility towards the consequences that have occurred due to her affair, exemplify her unsympathetic nature. Within the story itself we are led to see a duplicity in Marian which discredits her morally. Her kindness in taking Leo to Norwich for the new suit is marred by her ulterior motive of meeting Ted. Her affection for Leo is undermined by her use of him. The birthday present of the bicycle which almost diverts him from his own belief in moral duty to leave Brandham Hall is intended to make him a more efficient go-between. However, it is also conceivable that Marian�(tm)s unsympathetic tendencies are born out of a frustration and deep sadness she feels, as a result of her position and circumstances. She herself, it can be argued, is a victim of the time and social expectation. It is apt to end on a collaborative note from Keats, a quote that illustrates the essence of Marian�(tm)s character, ?La Belle Dame sans Merci�(tm) - The beautiful lady without mercy; mercy for herself, or for others. ...read more.