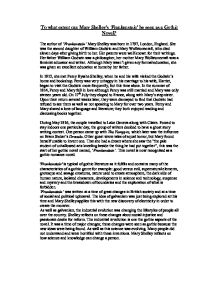 To what extent can Mary Shelley(TM)s Frankenstein(TM) be seen as a Gothic Novel?

To what extent can Mary Shelley's 'Frankenstein' be seen as a Gothic Novel? The author of 'Frankenstein' Mary Shelley was born in 1797, London, England. She was the second daughter of William Godwin and Mary Wollstonecraft, who died eleven days after giving birth to her. Her parents were well known for their writings. Her father William Godwin was a philosopher, her mother Mary Wollstonecraft was a feminist educator and writer. Although Mary wasn't given any formal education, she was given an excellent education at home by her father. In 1812, she met Percy Bysshe Shelley, when he and his wife visited the Godwin's home and bookshop. Percy was very unhappy in his marriage to his wife, Harriet, began to visit the Godwin more frequently, but this time alone. In the summer of 1814, Percy and Mary fell in love although Percy was still married and Mary was only sixteen years old. On 17th July they eloped to France, along with Mary's step sister. Upon their return several weeks later, they were dismayed to find that Godwin had refused to see them as well as not speaking to Mary for over two years. ...read more.

This is because the monster does not know why it is being rejected, although he is trying to socialize with the society. However the urge to create a monster is not common in the other novels written during the industrial era. The novel identifies all of the new discoveries can be a danger to the society of man kind. The search for knowledge can also be seen a gothic, this can be seen in Robert Walton's journey to find the Northwest Passage. 'I shall satiate my ardent curiosity with the sight of a part of the world never before visited, and may tread a land never before imprinted by the foot man'. Shelley highlights the danger of Walton's journey as desperate and dangerous. The phrase 'I shall satiate my ardent curiosity' shows Walton's desire for this new discovery, and leads the reader into thinking that Walton's voyage is very dangerous. It is a dangerous journey because no one has attempted it before. This is one of the examples where Shelley shows that social progress and the new discoveries are not always good for the world, and may lead to instability. This is gothic because the instability of the world could mean the end of Earth. ...read more.

Here, Mary Shelley points out the monster that was innocent at first becomes a savage beast after reading some book and gaining knowledge about the society. She uses this to criticise the world about how knowledge can change person in to a beast. In conclusion Mary Shelley has used this novel to criticise the mistakes made by the society. The novel is gothic genre due the fact that she uses many gothic ideas such as murder, isolated characters and dangerous voyages. In the novel the monster is an isolated character when he is rejected by the society and Robert Walton's desperate voyage to the northern passage. Referring back to the question, "To what extent can Mary Shelley's 'Frankenstein' be seen as a Gothic Novel?" Mary Shelley has used the different aspects of gothic to make this novel a gothic novel. She uses the monster to criticise the society about how new scientific discoveries can change the world in a bad way. She also shows that the passion for knowledge should be kept at a limit, because as shown in the novel exceeding the limit can lead regretful decisions in the future. For example, Victor's desire to make a monster, which he regrets, because it ends in his wholde family being killed. As well as Robert Watson's journey to find the north passage, which fails. ...read more.

This essay responds averagely to the question. What I like about this essay, against other similar ones discussing the gothic, is the way they look at concepts as a whole rather than feature spotting. This shows that you have the ...

This essay responds averagely to the question. What I like about this essay, against other similar ones discussing the gothic, is the way they look at concepts as a whole rather than feature spotting. This shows that you have the ability to look at the gothic as a whole genre, making for a more convincing argument. However, these gothic concepts are not evaluated strongly, and there is no discussion of the effects they have. The question's key phrase is "to what extent" yet this is not fully addressed. There is no exploration of alternative interpretations, which go towards forming an argument. It is not good enough at GCSE to simply state it is gothic as some concepts are evident.

The analysis here is okay. The essay identifies gothic concepts well, for example "The passion for knowledge and science can be seen as a gothic idea" but there is no in depth analysis of how the concept is displayed. If I were answering this question I would be aiming to analyse some key examples which provide an overall effect. There is a big difference between acknowledging concepts and analysis. This essay tends to retell the story and uses a narration of the plot to explain why it is gothic. For example a sentence such as "The monster lives in the forest with animalistic characters." adds nothing to the argument other than to "point out the monster that was innocent at first". Examiners will be looking for analysis of the language, form and structure used, and how these shape meanings and contribute to the gothic genre. Unfortunately the essay misses out on the chance to get some strong analysis in. There are some relevant pieces of contextual information, and these would be great if accompanied with analysis. For example stating "The idea of galvanism was just being explored" is good, but would be much more relevant if it was weaved in with the extract where the monster is created with electricity, creating a horror in the reader. There needs to be much more reader response to get the top marks.

The structure here is awful. There are three paragraphs which have no relevance to the task whatsoever, including pointless historical information. I can tell you that examiners will be fed up with your essay already, and you haven't even started any relevant points. An introduction should be concise and relevant, posing a strong argument which you then go onto explain. There doesn't seem to be any logical flow to the essay, and points are jumbled around. A clear signpost to each paragraph, showing what you are about to explain, can offer a more structured approach. Spelling, punctuation and grammar are fine. I didn't like how the conclusion had to state "referring back to the question" as this shows the essay has not been crafted to answer the question, but more of as a mind dump of historical factors and gothic knowledge.