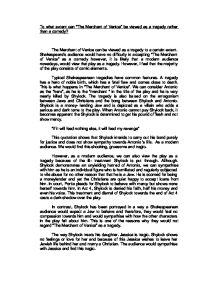 To what extent can &quot;The Merchant of Venice&quot; be viewed as a tragedy rather than a comedy?

To what extent can "The Merchant of Venice" be viewed as a tragedy rather than a comedy? The Merchant of Venice can be viewed as a tragedy to a certain extent. Shakespeare's audience would have no difficulty in accepting "The Merchant of Venice" as a comedy however, it is likely that a modern audience nowadays, would view that play as a tragedy. However, I feel that the majority of the play consists of comic elements. Typical Shakespearean tragedies have common features. A tragedy has a hero of noble birth, which has a fatal flaw and comes close to death. This is what happens in "The Merchant of Venice". We can consider Antonio as the "hero", as he is the "merchant " in the title of the play and he is very nearly killed by Shylock. The tragedy is also based on the antagonism between Jews and Christians and the bong between Shylock and Antonio. Shylock is a money- lending Jew and is depicted as a villain who adds a serious and dark tome to the play. ...read more.

The way Shylock treats his daughter. Jessica is tragic. Shylock shows no feelings or love for her and because of this Jessica wishes to leave her Jewish life behind her and marry a Christian. The audience would sympathise with Jessica and find this tragic. "Farewell, and if my fortune be not crossed I have a father, you a daughter lost." Jessica's hatred for Shylock leads her to betray him, by stealing his money and jewels and eloping with Lorenzo. This causes a modern audience to feel sorry for Shylock however; Solerio and Solanio present his reaction to the event in a comic way. This quotation evokes laughter, not sympathy and therefore changes the mood of the audience. A Shakespearean audience would mainly accept this type of comedy because as a modern audience, we cannot help feeling sorry for Shylock's double loss as it provides a serious tone to the play. Portia's scene with the three caskets can be seen as comic but it has a tragic tone to it. ...read more.

However, as a modern audience we do not share this amusement as we have been raised to pity figures that have been unfairly mocked and treated. Solerio and Solanio are a comic couplet and could be seen as typical Shakespearean clowns. They provide a light hearted atmosphere and lighten the mood in tragic scenes. They make these tragic scenes more comic so the audience are not preoccupied by the seriousness of the situation. For example, in Act 4 when Antonio learns that it is not possible for Shylock to carry out his bond, Gratiano says, " A Daniel, still say I, a second Daniel. I thank thee Jew for teaching me that word" He uses Shylock's words and sarcastically thanks him. This can be seen as comic. I think The Merchant of Venice is clearly a comedy, based on the definition of a Shakespearean comedy and the fact that there is more comedy to the play than tragedy. Even the most tragic scenes are uplifted by the witty quips of comic characters. However, there are tragic undertones to the play which results in a compassionate play with a mix of tragedy and humour. ?? ?? ?? ?? ...read more.