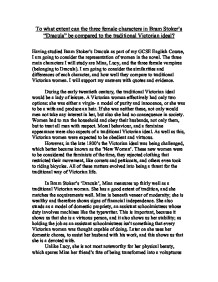 To what extent can thethree female characters in Bram Stoker's &quot;Dracula&quot; be compared to thetraditi

To what extent can the three female characters in Bram Stoker's "Dracula" be compared to the traditional Victorian ideal? Having studied Bram Stoker's Dracula as part of my GCSE English Course, I am going to consider the representation of women in the novel. The three main characters I will study are Mina, Lucy, and the three female vampires (belonging to Dracula). I am going to consider the similarities and differences of each character, and how well they compare to traditional Victorian women. I will support my answers with quotes and evidence. During the early twentieth century, the traditional Victorian ideal would be a lady of leisure. A Victorian woman effectively had only two options: she was either a virgin- a model of purity and innocence, or she was to be a wife and produce an heir. If she was neither these, not only would men not take any interest in her, but also she had no consequence in society. Women had to run the household and obey their husbands, not only them, but to treat all men with respect. Moral behaviour, and a feminine appearance were also aspects of a traditional Victorian ideal. ...read more.

She even pokes fun at the New Woman several times, as she notably writes "Some of the New Woman writers will someday start an idea that men and women should be allowed to see each other asleep, before proposing or accepting. Mina is summed up as having a very good aspiration of a traditional Victorian ideal, and she is credited well, especially by Dracula, for having, 'the brain of a man and the heart of a woman'. In many ways Lucy is much like her dear friend Mina. She is a paragon of virtue and innocence, such qualities that draw not just one man, but three suitors to her. She does have one crucial aspect that differs from Mina though, she is sexualized. Lucy has such physical beauty that captivates each of her suitors, turning her into a New Woman. She displays a comfort or playfulness about her desirability, that Mina never feels, and we can see that Lucy is turning into a New Woman, within the way she acts and dresses. She also quotes in a letter to Mina "Why can't they let a girl marry three men or as many as want her, and save all this trouble?" ...read more.

On the other hand, Lucy and the three female vampires are purely 'New Women'. They use their sexuality to attract men, breaking all tradition. All of their moves are a promise of sexual fulfillment and a curse. Bram Stoker's novel 'Dracula' indulges the Victorian male imagination, regarding the topic of female sexuality. The extent of the characters merely over looks the traditional Victorian ideal. Sometimes the characters fulfil their role well, but sometimes everyone betrays the tradition. Stoker created an image at a first glance that the characters appear to be cast in typical gender roles, the purpose of this being not to upset or threaten the reader's sense of how things should be. He then creates suspense into the actions of the characters, for example, Mina turning into some one like Lucy; will she be lost? Bram Stoker shows us with Mina, that she was able to achieve her own goals, as well as the typical goals of Victorian women. Mina still carries on with the tradition as well as maternal instincts, and we know this from the important information given to us after the novel; her having a baby. This is therefore showing us that Victorian Women could do more than that was traditionally common or expected, without the rebellious, threatening 'New Woman'. By Jade Boggust (10A) ...read more.

A very good essay, well written and logically structured. Some perceptive and insightful comments are made but at times would have benefited greatly from more textual references.
Good use of topic sentences and social and historical references. ****