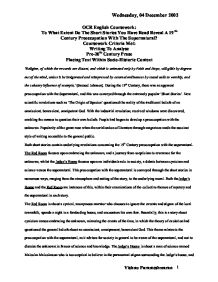 To What Extent Do The Short Stories You Have Read Reveal A 19th Century Preoccupation With The Supernatural?

OCR English Coursework: To What Extent Do The Short Stories You Have Read Reveal A 19th Century Preoccupation With The Supernatural? Coursework Criteria Met: Writing To Analyse Pre-20th Century Prose Placing Text Within Socio-Historic Context 'Religion, of which the rewards are distant, and which is animated only by Faith and Hope, will glide by degrees out of the mind, unless it be invigorated and reimpressed by external ordinances by stated calls to worship, and the salutary influence of example,' (Samuel Johnson). During the 19th Century, there was an apparent preoccupation with the Supernatural, and this was conveyed through the extremely popular 'Short Stories'. New scientific revelations such as 'The Origin of Species' questioned the reality of the traditional beliefs of an omniscient, benevolent, omnipotent God. With the industrial revolution, received wisdoms were discovered, enabling the masses to question their own beliefs. People had begun to develop a preoccupation with the unknown. Popularity of the genre rose when the serialisation of literature through magazines made the succinct style of writing accessible to the general public. Both short stories contain underlying revelations concerning the 19th Century preoccupation with the supernatural. The Red Room focuses upon embracing the unknown, and a journey from scepticism to reverence for the unknown, whilst the Judge's House focuses upon an individuals role in society, a debate between cynicism and science versus the supernatural. This preoccupation with the supernatural is conveyed through the short stories in numerous ways, ranging from the atmosphere and setting of the story, to the underlying moral. Both the Judge's House and the Red Room are instances of this, within their examinations of the collective themes of mystery and the supernatural in each story. The Red Room is about a cynical, anonymous narrator who chooses to ignore the caveats and stigma of the local townsfolk, spends a night in a foreboding house, and encounters his own fear. ...read more.

Firstly, it is conveyed by the loss of sight, and the way that sensory perception is deprived; 'I was now almost frantic with the horror of the coming darkness, and my self-possession deserted me.' This has the effect of showing that the protagonist's confidence and arrogance isn't as strong as he believes it to be. The fear is the darkness, and the darkness engulfs him. This tells the reader that if you do not appreciate the unknown, then it will engulf and destroy you. As with the Judge's House the protagonist unwittingly personifies inanimate objects in his fear. This is shown in the Red Room when he gives the candles human characteristics; 'I saw the candle in the right sconce of one of the mirrors wink and go right out...' The fact that the candles are winking shows that the protagonist has given them human attributes. The fact that the antagonist is fear is also conveyed through the number of candles that are lit by the protagonist. The numbers 7 and 10 were considered by numerologists at the time to be very pure, complete numbers. Therefore, the number 17, formed when the two numbers are combined, was considered to be the number representative of universal chaos and disorder. This number was particularly ominous in the 19th Century, and the fact that this number of candles is used foreshadows ominous events. The language that the protagonist uses to describe fear is very loaded; '...that deafens and darkens and overwhelms.' This language is used as a mild form of intimidation, with the intent that the reader will become slightly fearful of being sceptical of the unknown. This relates to the theme of a metaphorical journey from cynicism to embracing the unknown. The irony with the Red Room is that after the protagonist stated that 'it would take an extremely tangible ghost to frighten me' it turned out that the thing he feared most was untouchable, intangible, and thus reflective of the fear of the unknown. ...read more.

An example of this would be the actual journey to the red room, in which his arrogant and confidant facade shown earlier is undermined by the jitters and fears that is shown as he travels to the red room. The previous irony of the phrase 'it would take a very [in]tangible ghost to frighten me,' foreshadows that this assertion will inevitably come true in one form or another. The protagonist, in his fear, unwittingly gives inanimate objects human characteristics. An example of this would be when he suggests that the candles were winking; '...I saw the candle in the right sconce of one of the mirrors wink and go right out...'. The fact that the lights constantly go out foreshadows the fact that the lights will inevitably go out. He also personifies things such as darkness and fear; '...closed upon me like the shutting of an eye,' this shows the anxiety experience by the protagonist, as he unwittingly gives darkness such characteristics. Through the whole story, the narrative gradually crescendos, and this is mirrored by the increasingly tempestuous weather. The author uses pathetic fallacy to mirror the psychological mood of the story, and this adds to the ambience of the play. The author portrays the protagonist as an example to society, and the reader will be astutely aware of the message that is delivered...do not disrespect the supernatural and unknown. Atmosphere is suggested also by the description of the peripheral characters. They are described with incredibly grotesque vocabulary; 'withered arm/pale eyes/monstrous shadow,' thus creating quite a frightening atmosphere, and also building up the texture of the plot. They also act as a red herring to the protagonist. When described in such context, the reader would assume they are the antagonists of the story...yet ironically in the end they provide the aid to the protagonist. The atmosphere is also suggested by the continual repetition of the phrase 'this night of all nights,' which creates suspense as the reader anticipates what is so special about that exact date. ...read more.