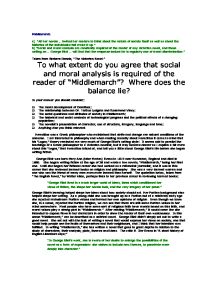 To what extent do you agree that social and moral analysis is required of the reader of &amp;#147;Middlemarch&amp;#148;? Where does the balance lie?

Middlemarch. a) "All her novels ... invited her readers to think about the nature of society itself as well as about the histories of the individuals that make it up." b) "Social and moral analysis are constantly required of the reader of any Victorian novel, and those writing on ... George Eliot ... will find that the response looked for is regularly one of moral discrimination." Taken from Barbara Dennis, "The Victorian Novel." To what extent do you agree that social and moral analysis is required of the reader of "Middlemarch"? Where does the balance lie? In your answer you should consider; * The moral development of Dorothea; * The relationship between Dr. Tertius Lydgate and Rosamond Vincy; * The social questions and attitudes of society in Middlemarch; * The historical and social contexts of technological progress and the political effects of a changing population; * The novelist's presentation of character, use of structure, imagery, language and tone; * Anything else you think relevant. Heraclitus was a Greek philosopher who maintained that strife and change are natural conditions of the universe. I am interested in philosophy and when reading recently about Heraclitus it came to mind that his "Logos," theory reminded me very much of George Eliot's writing style! It seems odd to parallel the teachings of a Greek philosopher to a Victorian novelist, but it may become clearer as I explain a bit more about this "Logos," that Heraclitus talked of, and tell you a little about George Eliot's life before she began writing fiction. George Eliot was born Mary Ann (later Marian) Evans in 1819 near Nuneaton, England and died in 1880. She began writing fiction at the age of 38 and wrote a few novels, "Middlemarch," being her final one. Until she began her fictional career she had worked as a rationalist journalist, and it was in this career that she reviewed learned books on religion and philosophy. ...read more.

The British scientist and author Jacob Bronowski (1908 -74) once said; "No science is immune to the infection of politics and the corruption of power." I think this is a relevant quote as in "Middlemarch," we see how his ambition to make his mark in the field of medicine and make breakthroughs in his field was hampered by his wife and the power she has over him. In terms of politics, I think that the social attitude in Middlemarch at that time affected Lydgate's work also, but in general it was Rosamond who had a major effect on his career. Earlier in the book Lydgate says about women in general; "But he had more reason than ever for trusting his judgement, now that it was so experienced; and henceforth he would take a strictly scientific view of women, entertaining no expectations, but such as were justified beforehand." I thought this was very ironic indeed, as with Rosamond he seems to have lots of expectations of her, and doesn't really get to know her at all before he marries her. He is taken by her beauty but doesn't realise how selfish she is. Rosamond, after she marries him wants to have the best furniture for their house and Lydgate is na�ve in giving it to her. They both have an unthinking attitude and don't really work out their financial situation, and even before they are married hey spend more than they can afford. Later when they are married, we see how much Rosamond cares for money and social status and as a reader it is easy to despise her scheming ways. Some may say I am being harsh when I describe Rosamond as scheming but I don't think so at all. When Lydgate is in debt and wants to lease their house to Ned Plymdale he asks Trumbull to help him do so. Rosamond goes behind his back intentionally and tells Trumbull that Lydgate has changed his mind. ...read more.

I found that it was refreshing to read a book where I constantly had so many things to think about, and where the actions of a fictitious character written so many years ago still seemed relative to me today. I can understand that if the book was written in a slightly different way, one in which there was no humour, irony or moral discrimination for a reason, that it could have become tedious and then I would have agreed that the constant analysis was not good. The fact is though that "Middlemarch," is not this sort of book. George Eliot has not made it seem like a struggle to read, the moral analysis required of the reader is indirect, we do it without even realising we are doing so and it is entertaining at times when we realise how wrong a character has been. In saying that it is an entertaining book, I can also see that Middlemarch was not written primarily to entertain, in my opinion George Eliot's mind is much too intellectual for that. The author delves deeper into the character and portrays human life in a more interesting way than other Victorian novelists did. David Cecil says it is one that, "Like the novel today it is a medium for the discussions of the serious problems and preoccupations of mature life." He also says of the book that; "She stands at the gateway between the old novel and the new, a massive caryatid, heavy of countenance, uneasy of attitude; but noble, monumental, profoundly impressive." To sum up my own view of "Middlemarch," I would say that I see the book as a novel concerned with the way in which we live our life. It a book that is still relevant today, and will continue to have relevance for years to come. It makes us challenge the way we live and think and above all else it was, and still is, an outstanding criticism of life. ?? ?? ?? ?? 8 ...read more.