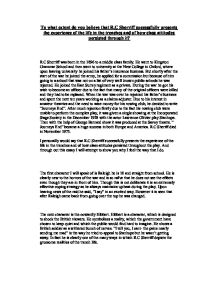 To what extent do you believe that R.C Sherriff successfully presents the experience of the life in the trenches and of how class attitudes persisted through it?

To what extent do you believe that R.C Sherriff successfully presents the experience of the life in the trenches and of how class attitudes persisted through it? R.C Sherriff was born in the 1896 to a middle class family. He went to Kingston Grammar School and then went to university at the New College in Oxford, where upon leaving university he joined his father's insurance business. But shortly after the start of the war he joined the army, he applied for a commission but because of him going to a school that was not on a list of very well known public schools he was rejected. He joined the East Surrey regiment as a private. During the war he got his wish to become an officer due to the fact that many of the original officers were killed and they had to be replaced. When the war was over he rejoined his father's business and spent the next ten years working as a claims adjuster. Due to his interest in amateur theatrics and the need to raise money for his rowing club, he decided to write "Journeys End". After much rejection firstly due to the fact his rowing club were unable to perform the complex play, it was given a single showing at the Incorporated Stage Society in the December 1928 with the actor Lawrence Olivier play Stanhope. ...read more.

as captain hardy says, "he's the best chap but I never did see a youngster put away the whisky he does". But through the fact that he is a drunk it is still clear that the men and his fellow officers consider him to be a great leader. The friendly fat officer Trotter is next. Trotter is one of the lucky people who like R.C.Sherriff was promoted through the ranks. He is a simple man whose coping tactic is to draw circles for every hour of the time he is on the frontline. All the other officers due to the fact he is working class consider him simple. And Stanhope even considered him to have no imagination because of the lower status. He is also depicted as lacking in good taste his due to his patriotic garden "geraniums, lobelia, and calceolaria- you know red, white, and blue" But it is still clear he is valued because after Osborne's untimely death he is immediately given the role of second in command. This shows that during the war class barriers are beginning to break. And lastly the main character in the book the reliable Osborne He is the oldest person in the group of officers but he does not make other people feel he is the man on top in fact he executes his authority almost suggestively. ...read more.

This is shown in the play by the way in which a working class character like Trotter was promoted to the position of authority, which without the war would be impossible for him to get to. But during the war something's still remained the same for example when Stanhope asks, "have the men been fed yet" it is like they are referring to farmyard animals. A rather ironic event involving class is the way in which Trotter refers to the cook (Mason) "as getting rather to familiar" what he means by this is that the working class cook is getting to "buddy, buddy" with the officers in a way sidestepping the barrier of class. This is extremely ironic due to the fact that it was not that long ago when Trotter was his equal. I feel that, that is to remind the audience that the officers were above the cook and not to get confused by the way in which mason almost acts like a friend to them. In conclusion it is my belief that R.C. Sheriff did a good job in portraying the horrors of the war which he and I his comrades suffered. He also showed the class attitudes throughout the play. He did this in many ways including the way in which he used the character Hibbert to show the way effect of the war on humans. All of them being extremely effective. Joshua brown 4c ?? ?? ?? ?? ...read more.