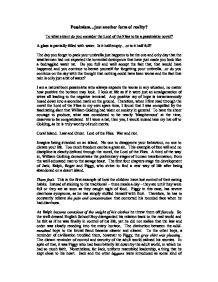 To what extent do you consider the Lord of the Flies to be a pessimistic novel?

Pessimism...just another form of reality? To what extent do you consider the Lord of the Flies to be a pessimistic novel? A glass is partially filled with water. Is it half empty...or is it half full? The day you forget to pack your umbrella just happens to be the one and only day that the weathermen had not expected the torrential downpours that have just made you look like a bedraggled water rat. Do you full and well accept the fact that, that would have happened and you continue to berate yourself for forgetting your umbrella...or do you continue on the day with the thought that nothing could have been worse and the fact that rain is only just a bit of water? I am a natural born pessimistic who always expects the worse in any situation, no matter how positive the horizon may look. I look at life as if it were just an amalgamation of wires all leading to the negative terminal. Any positive ray of hope is instantaneously hosed down into a scorched mark on the ground. Therefore, when I first read through the novel the Lord of the Flies in my own spare time, I found that I was compelled by the fascinating slant that William Golding had taken on society in general. To have the sheer courage to produce, what was considered to be nearly 'blasphemous' at the time, deserves to be congratulated. If I wore a hat, then yes, I would indeed take my hat off to Golding, as he is truly worthy of such merits. Coral Island. Law and Order. Lord of the Flies. War and riot. Imagine being stranded on an island. No one to disapprove your behaviour, no one to dictate your life. Too much freedom can be a great sin. This example of free will and no discipline is clearly defined through the novel, the Lord of the Flies. ...read more.

Their only hope of civilisation without an adult is slowly retreating into the darkness of the opaque and mud-spattered conch. Furthermore, the chapter titles are an indication of how themes transform, not for the best, but in fact take a turn for the worse. There is a trace of hope with the beginning of the story being entitled The Sound of the Shell. It seems to portray that there is still a sense of civil obedience and if given the chance, the boys could lead life of structure. Yet, what we learn is that civilisation is only skin deep, and even though this scenario is set in the 1950s, its concept is ageless. Golding shows that when there is no adult-like figure or one of authority, patterns of behaviour will change. The deviation away from society was symbolised by the ominous chapter tiles: Painted Faces and Long hair, A View to Death, and finally the Cry of the Hunters. Ultimately, the novel had climaxed into a random state of sheer pandemonium. Having analysed the main characters so far in the novel, it is evident each of the different characters represents a different part of society, thus showing that the island as a whole is a microcosm of the world. It portrays how society functions with different elements causing its downfall, or for those who are optimistic among us, causing its upbringing. The boys are allegorical as they convey a symbolic significance. So far it seems that everything has begun to turn sour and the typical 1950s English audience would have been very disapproving of these changes. Jack's continual submission from his opaque mad look made him even more sinister. As the eyes are typically thought of as the mirrors of the soul in literature, it is right to see that Jack had mad eyes, compared to the mild-mouthed Ralph. However, the thing that struck me most was the fact that nobody cared to notice the disappearance of the boy with the mulberry birthmark, until Piggy happened to mention it. ...read more.

The reason the boys have been stranded on the island is because the have been evacuated from the supposed 'dangers' of war in the adult world. It was only by fluke that the officer happened to land on the island just in time to save Ralph from being brutally murdered. Our imagination need not be let loose to imagine the horrific events that would have followed, had the officer not whistled in embarrassment at the sight before him. The memories of ages ago would not have returned to the savages, had they not seen a sign of authority. Being only fifteen when writing this essay, I cannot say that I have had all the experience, but I consistently find that people around me try to shelter my knowledge and push me deeper into the confinements of 'safety'. Yet, surely there has to be a limit to how far you can ground a child and hide them from the truth? As adults are able to corrupt the world in which we live in, they try to blindfold us, in the name of protection. So, aren't you just teaching us to blindly blunder into life? I am sure that you will agree with me in saying that William Golding wasn't a pessimist. Though the people of his time may have branded him with innumerate foul names, you must believe that he only showed the virulent realities of the human nature. So if everything in the Lord of the Flies was written by William Golding, his ideas must have a shred of credible reality. The worsening, mood, weather and scenery all contributed to the hazardous conclusion. These aspects weren't pessimistic to say the least; they were just showing the veritable truth. Unpalatable as it may be, the truth has to be adhered to and novels like Coral Island only seem to be handing out sugar-filled table spoons of hope. Hope in a whimsical world that simply does not exist. Coral Island. Optimism, definitely, and fantasy. Lord of the Flies. Pessimism, maybe, but reality. ?? ?? ?? ?? ...read more.