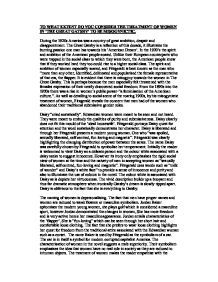 TO WHAT EXTENT DO YOU CONSIDER THE TREATMENT OF WOMEN IN 'THE GREAT GATSBY' TO BE MISOGYNICTIC. During the 1920s America was a country of great ambition

TO WHAT EXTENT DO YOU CONSIDER THE TREATMENT OF WOMEN IN 'THE GREAT GATSBY' TO BE MISOGYNICTIC. During the 1920s America was a country of great ambition, despair and disappointment. The Great Gatsby is a reflection of this decade, it illustrates the burning passion one man has towards his 'American Dream'. In the 1920's the spirit and ambition of the American people soared. Unlike their European counterparts who were trapped in the social class to which they were born, the American people knew that if they worked hard they too could rise to a higher social class. The spirit and ambition of women especially soared, and Fitzgerald is best known as the man who "more than any other, Identified, delineated and popularised the female representative of that era, the flapper. It is evident that there is misogyny towards the women in The Great Gatsby. This is perhaps because the men especially felt threatened with the females expression of their newly discovered social freedom. From the 1890s into the 1920s there was a rise in women's public power-"a feminisation of the American culture.". ...read more.

Jordan entails characteristics of the 'flapper'. She is "fun-loving" which can be seen through her short hair and comfortable loose clothing. The fact that she prefers to wear loose clothing highlights her quest for freedom from the traditional attire associated with the Edwardian woman such as a corset. The name Baker is used by Fitzgerald as the symbolism of a car. The car is in itself a symbol for modern corrupted capitalist America. The characterisation of women in the novel suggests a male superiority. Their symbolism emphasises the idea that women have no real role in society as they are reduced to inhuman objects. The treatment of women makes the reader empathise with the women who are simply trying to break free from their social constraints and become more involved in society as opposed to being "angels of the house". Nick gives us a retrospective narrative and as the novel in written in the first person we an insight into Nick's views. "Dishonesty in a woman is a thing you can never blame deeply", this statement by Nick is clearly misogynistic to women. ...read more.

Although it is there and "sees everything", the characters don't pay attention to it. The acquisition of material wealth is often equated with happiness in America. This is true today and it was true during the 1920s. Fitzgerald shows how the American dream is like a rose. The rose represents Daisy and symbolises Gatsby's dream, that of an outwardly beautiful concept. Just as the dream is fragile, so is she and the dream only lasts for a short while before it accounts to "nothing". The treatment of women in this novel is misogynistic however this is purely because the men and society in general was afraid of sharing quality with women. Women were becoming liberated and the misogyny was a way of the men holding on to power. They treatment of women helps the reader to understand the change in society in the 1920s and enables us to empathise with the women who are merely trying to get a voice in society. Most importantly the Great Gatsby shows "They were careless people, Tom and Daisy-they smashed up things and creatures and then retreated back to their money or their vast carelessness, or whatever it was that kept them together, and let other people clean up their mess they had made" ...read more.