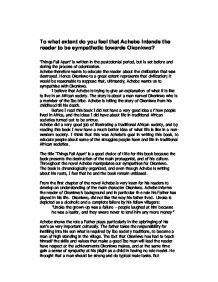 To what extent do you feel that Achebe intends the reader to be sympathetic towards Okonkwo?

To what extent do you feel that Achebe intends the reader to be sympathetic towards Okonkwo? 'Things Fall Apart' is written in the postcolonial period, but is set before and during the process of colonization. Achebe therefore wants to educate the reader about the civilization that was destroyed. Hence Okonkwo to a great extent represents that civilization; it would be reasonable to suppose that, ultimately, Achebe wants us to sympathise with Okonkwo. I believe that Achebe is trying to give an explanation of what it is like to live in an African society. The story is about a man named Okonkwo who is a member of the Ibo tribe. Achebe is telling the story of Okonkwo from his childhood till his death. Before I read this book I did not have a very good idea of how people lived in Africa, and the ideas I did have about life in traditional African societies turned out to be untrue. Achebe did a very good job of illustrating a traditional African society, and by reading this book I now have a much better idea of what life is like in a non-western society. I think that this was Achebe's goal in writing this book, to educate people about some of the struggles people have and life in traditional African societies. The title 'Things Fall Apart' is a good choice of title for this book because the book presents the destruction of the main protagonist, and of his culture. Throughout the novel Achebe manipulates our sympathies for Okonkwo. ...read more.

Yet, even though Okonkwo was highly respected and regarded as a great man, many also feared him. "His wives especially the youngest, lived in perpetual fear of his fiery temper and so did his little children" His whole life was dominated by fear, the fear that he may resemble his father, and this fear lay deep inside of him. His temper often spills over into violence too. "Whenever he was angry and could not get his words out quickly enough, he would use his fists" We see this violent side to Okonkwo when we learn that he had been banished from the Ibo tribe for seven years because he killed a boy. Achebe, I think would want us to respond to this murder in a way that does not just condemn Okonkwo's actions but to make us think why he would do such a terrible thing. Should we feel any sympathy towards Okonkwo at all? I believe that Achebe would expect us to be angry with Okonkwo at this particular point, as he has committed a very serious crime, yet at the same time sympathise with the fact that Okonkwo has to go into exile for seven years. Okonkwo lost all of his titles and his standing in the Ibo tribe. This would have put a large dent in Okonkwo's pride, and after the seven years in exile, were over he was allowed to return to the Ibo tribe but with his reputation in ruins, he had to start his life over. ...read more.

Therefore I think that there is a lot to be learnt from traditional African societies about how to live, how to survive and how to treat others. I think that a culture that partakes in rituals or set ways that seem to be just and logical to them, then they should be left to get on with that, even if other cultures think it is immoral to do so. Okonkwo's death is the main point that I felt Achebe intended us to be sympathetic towards him, the way in which Okonkwo's body is discovered does not some how seem to do Okonkwo the justice he rightfully deserves. "Then they came to the tree from which Okonkwo's body was dangling, and they stopped dead" Okonkwo was not a man with out his faults but he was a decent man deep down and did not deserve to die in the way he did. By glancing at Okonkwo's life, we could see that the title 'Things Fall Apart' fits perfectly with the book. Starting from the murder of Ikemefuna, we see that Okonkwo's life will fall apart. Then, later on in the book, when Okonkwo was thrown in to exile, we could have been sure that Okonkwo's hopes of being rich and famous were ruined. After all that, with the incident of Nwoye, we see that Okonkwo's life was a total failure. Achebe, I think presented Okonkwo to us the reader, intending us to see that even though Okonkwo had achieved his goals initially, by the end of his life, he had become a failure like his father. By Hayley Gibbs ...read more.