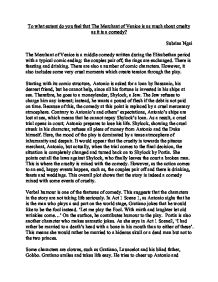 To what extent do you feel that The Merchant of Venice is as much about cruelty as it is a comedy?

To what extent do you feel that The Merchant of Venice is as much about cruelty as it is a comedy? Subrina Ngai The Merchant of Venice is a middle comedy written during the Elizabethan period with a typical comic ending: the couples pair off, the rings are exchanged. There is feasting and drinking. There are also a number of comic characters. However, it also includes some very cruel moments which create tension through the play. Starting with its comic structure, Antonio is asked for a loan by Bassanio, his dearest friend, but he cannot help, since all his fortune is invested in his ships at sea. Therefore, he goes to a moneylender, Shylock, a Jew. The Jew refuses to charge him any interest; instead, he wants a pound of flesh if the debt is not paid on time. Because of this, the comedy at this point is replaced by a cruel mercenary atmosphere. Contrary to Antonio's and others' expectations, Antonio's ships are lost at sea, which means that he cannot repay Shylock's loan. As a result, a cruel trial opens in court; Antonio prepares to lose his life. ...read more.

Shylock lends his money to Antonio and wants his flesh if he cannot pay back on time: 'If you repay me not on such a day...let the forfeit be nominated for an equal pound of your fair flesh, to be cut off and taken in what part of your body pleaseth me.' He emphasizes that the pound of flesh cannot be replaced by any pleas of mercy and refuses offers of a loan many times over. He feels intense hatred for Antonio as he is a Christian: 'O father Abram, what these Christians are, whose own hard dealings teaches them suspect the thoughts of others! He wants to take his life by this bond, which is actually revenge. He takes it to the court. The trial is an important part in the play as it both represents cruelty and humour. The cruelty mostly comes from the treatment towards Shylock. He seems to be the villain all the way through, but he, in some ways, is depicted as a victim. In Act 4 Scene 1, Shylock is preparing to win Antonio's flesh and being so inhuman that he does not allow Antonio to have a surgeon to attend his wounds because it was not named in the bond. ...read more.

To him, money is the most important thing in his life. As Portia raise that all his property will be confiscated, it is very ruthless as he will therefore lose everything in his life at the situation of missing a daughter, losing property and the trial towards Antonio. He claims that if they are going to take over his money, they should take his life at the same time. He would rather die than living alone on the street. In conclusion, this play is a typical comedy with also cruel plot, which gives interest to the play. To its end, Portia makes fun of Bassanio telling him that she slept with the doctor in return for the ring, but then she confesses the whole story of how she was the doctor, and Nerissa the clerk, at the court in Venice. Other good news is that Antonio's ships 'are richly come to harbour'. Finally the joy of Antonio and the lovers are complete, and here ends the wonderful play. From this play, it makes us understand more about people's emotional response and the way we should behave. It is very appealing to our imaginations and gives us a wider sensitivity to what we see and so is life enhancing. ...read more.