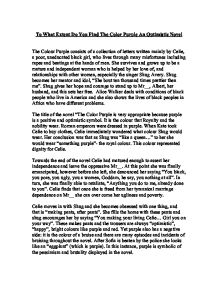 To What Extent Do You Find The Color Purple An Optimistic Novel The Colour Purple consists of a collection of letters written mainly by Celie, a poor, uneducated black girl, who lives through many misfortunes including rapes and beatings at the hands of men. She survives and grows up to be a mature and independent woman who is helped by her love of, and relationships with other women, especially the singer Shug Avery. Shug becomes her mentor and idol, "She bout ten thousand times prettier then me". Shug gives her hope and courage to stand up to Mr__, Albert, her husband, and this sets her free. Alice Walker deals with conditions of black people who live in America and she also shows the lives of black peoples in Africa who have different problems. The title of the novel "The Color Purple is very appropriate because purple is a positive and optimistic symbol. It is the colour that Royalty and the nobility wear. Roman emperors were dressed in purple. When Kate took Celie to buy clothes, Celie immediately wondered what colour Shug would wear. Her conclusion was that as Shug was "like a queen..." ...read more.

At the beginning Celie sees God as a wise old white man with a beard. In time Shug persuades Celie that God is a power in nature and also a spiritual force within man and this is positive. God is pantheistic and present everywhere. He wants man simply to delight in himself and so worship creation. Thus "The Color Purple" is a symbol of the wonder of god. " I think it pisses god off if you walk by the color purple in a field somewhere and don't notice it." This statement is an example of the positive in "The Color Purple". Celie and her sister Nettie are virtually enslaved in the early part of the story, not by whites but by their own people. Celie even calls her husband "Mr__" as she is too afraid to call him by his first name, Albert. The author shows that black men consider women to be mere positions just like a cow. Before Mr__ takes Celie as his wife "he look me up and down", he inspects her like he would an animal he is about to purchase. One of the central themes of the book is that poverty, blackness and womanhood are rich and beautiful gifts. ...read more.

She is not submissive and has great strength of character. She can, and does fight for what she wants, but, of course, her aggression results in her dreadful experience at the hands of the police after she dares to "talk back" to the white mayor, "When I see Sofia I don't know why she still alive. They crack her skull, they crack her ribs..." subsequently she is sentenced to a life of drudgery as the mayor's servant which lasts for many years. The bond between her and Mary Agnes is stronger than their mutual claim on Harpo's affections. The book ends on a happy, optimistic note. The last and most optimistic letter of all is addressed to "Dear God. Dear stars, dear trees, dear shy, dear peoples. Dear Everything. Dear God". In this letter all the main characters are reconciled in a fairy tale ending. Nettie and her family return safely home, Celie is reunited with her family at last and Sofia returns to Harpo. Although Celie is no longer young, her happiness makes her feel "...the youngest us ever felt". Despite tremendous disadvantages, deprivation and violence she overcomes her struggles, finally achieves independence and self-confidence. She frees herself from her oppressive environment and thus The Color Purple is an optimistic novel, and this is why I find The Color Purple to be an optimistic novel. ...read more.