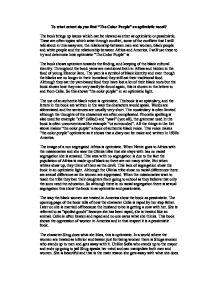 To what extent do you find

To what extent do you find "The Color Purple" an optimistic novel? The book brings up issues which can be viewed as ether as optimistic or pessimistic. These are often topics which arise through conflict, some of the conflicts that I will talk about in this essay are: the relationship between men and women, black people and white people and the relationship between Africa and America. I will use these to try and determine how optimistic "The Color Purple" is The book shows optimism towards the finding, and keeping of the black cultural identity. Throughout the book yams are mentioned both in Africa and hidden in the food of young Eleanor Jane. The yam is a symbol of black identity and even though the blacks are no longer in their homeland they still eat their traditional food. Although they eat the yam based food they have lost a lot of their black roots but the book shows how they can very easily be found again, this is shown in the letters to and from Celie. ...read more.

The opening page of the book tells of how the character Celie is raped by her step father. Later on she is married off because the husband to be is getting a cow with her. She is referred to as "spoiled goods" because she has been raped, she is treated like an animal. Celie is often beaten and raped and no one cares what she thinks. This book shows the oppression of women in America and in that respect it is a pessimistic book. The character Shug does what she likes, this is optimistic. In a world where the women are treated as inferior and beaten just for being women there is Shuga women who stands up to men and gets away with it. Unlike Sofia who stands up to the mayor and ends up going to jail Shug speaks her mind and can manipulate both men and women. She is beautiful and that is the main reason she gets away with what she does. Although this allowance of mischief is only because of her looks it is a start to letting women speak their mind. ...read more.

In the last quarter of the book after Celie has left her husband she decides to start making "pants". Pants were a typically male type of clothing and women never wore them, so this making of pants for men and women alike is a novelty. I think that gives a very optimistic view of how women may be treated after the 1930s. As we can see the book in many respects is very pessimistic this is extremely apparent in the first third of the book where Celie is both beaten and raped. The book shows how men try to overpower women and how America tries to change Africa for the so called better. The whites also try to keep the blacks in the gutter as if they are less important .The book later becomes more optimistic as the characters become free of their burdens which are holding them back. These burdens are both mental and physical and when they are free of these they become happier. This subsequently makes the book more optimistic. I think that "The Color Purple" is both optimistic and pessimistic but the optimism shines through the pessimism in the end of the book. ...read more.