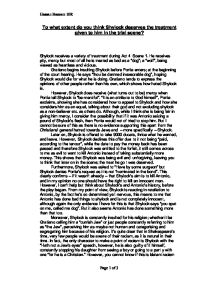 To what extent do you think Shylock deserves the treatment given to him in the trial scene?

To what extent do you think Shylock deserves the treatment given to him in the trial scene? Shylock receives a variety of treatment during Act 4 Scene 1. He receives pity, mercy but most of all he is treated as bad as a "dog"; a "wolf", being viewed as heartless and vicious. Gratiano begins insulting Shylock before Portia enters; at the beginning of the court hearing. He says "thou be damned inexecrable dog", hoping Shylock would die for what he is doing. Gratiano tends to express the opinions of other people rather than his own, which shows how hated Shylock is. However, Shylock does receive (what turns out to be) mercy when Portia tell Shylock to "be merciful". "It is an attribute to God himself", Portia exclaims, showing she has considered how to appeal to Shylock and how she considers him as an equal, talking about their god and not excluding shylock as a non-believer etc. as others do. Although, while I think she is being fair in giving him mercy, I consider the possibility that if it was Antonio seizing a pound of Shylock's flesh, then Portia would not of tried to stop him. But I cannot be sure of this as there is no evidence supporting this apart from the Christians' general hatred towards Jews and - more specifically - Shylock. ...read more.

Portia then says "this bond doth give thee here no jot of blood". I feel as if this is incorrect, Antonio knew blood would be drawn and he was ready to die which proves it. However, this was a good solution to the problem, Antonio lives; Shylock can take the money and it would all be over. But again, Shylock does not receive justice due to this, and after the treatment he gets, I think he deserves it. Here, I think Portia is being especially unfair by leading Shylock on, leading him to think he was going to get his revenge but then right at the last second she crushes his spirit. I think she could've easily laid down this information at the start of the hearing. She is clearly trying to humiliate him in front of everybody, which, in my opinion, is disgusting considering the humiliation he already receives plus what that information alone would do to him to start with! Portia punishes him further when she reveals that since Shylock is "an alien" trying to "seek the life of an innocent", "half his goods" got to Antonio, and the other half to the Duke. From earlier on in the play, Shylock has shown that money is one of the most important things to him. ...read more.

At the start of the play, I would have never thought he would do that, he wasn't that kind of person. But after his outer shell and his inner too were broke down, I can see he is very brittle and sad because he is alone. And suicide is what I can see him doing because he thinks if he kills himself, he will have at least be doing it on his own terms, when in fact, it's the opposite. In conclusion, I believe Shylock didn't receive the treatment he got. He has been segregated and insulted. He was a normal man trying to make profit, who had been insulted and spat on. He failed in getting his revenge and was humiliated for it. If I wrote this is Shakespeare's time, I'm sure I'd be writing a very different essay with a very different conclusion. I'd be supporting Antonio etc. With all the lessons I've learnt from the past generations, I see Shylock should not be treated differently because of his religion. The outcome of the story would be so different if Antonio was to try and kill Shylock even though really they're so similar. They both are trying to get business done with a slightly evil side to them. Antonio wouldn't have been treated badly, so Shylock shouldn't have been. Hassan Bassam 10R Page 1 of 3 ...read more.

The candidate does not begin this essay with a clear introduction, this lowers the tone of the essay before youÃ¢â‚¬â„¢ve even read the first couple of paragraphs. You should use your introductory paragraph to outline the topics that you plan ...

The candidate does not begin this essay with a clear introduction, this lowers the tone of the essay before youÃ¢â‚¬â„¢ve even read the first couple of paragraphs. You should use your introductory paragraph to outline the topics that you plan discuss, state any questions that you intend to answer (in this case does Shylock deserve the treatment he receives?) and summarise any relevant points. This is your chance to catch the readers attention, you should try and make it short and to the point but interesting (which can be done by mentioning additional facts from independent research). As for the candidates response they do attempt to discuss the various ways in which Shylock is treated, however you should mention how the character's are felling and what they might be thinking, even if its just a guess, your opinions matter. The candidate fails to do this, which weakens their response. However on a positive note, the candidate does clearly answer the set question in their conclusive paragraph and this is essential with this type of essay.

There is very little analysis within this essay and for the most part the candidate simply uses quotations form the play to retell the story. This is something you need to avoid as much as possible. It is often important to discuss certain scenes in a play, but you need to find a way to do this without simply retelling the story. As I mentioned earlier you should discuss the characters thoughts and feelings. When selecting appropriate quotations to use, you should pick ones that you feel back up your ideas and opinions. In addition the candidate could have gained a higher grade by undergoing independent research, this shows your interest in the play and also makes the essay more enjoyable for the reader. Finally though the candidate does conclude the essay, the conclusion is weak, as well as answering the initial question, you should summarise your key points and ideas and include your personal opinions. The candidate does attempt to explain why they think Shylock didnÃ¢â‚¬â„¢t deserve the treatment he received, but this could have been developed further. A strong conclusion brings the essay to a close and gives you a chance to leave the reader with a good impression.

Unfortunately the candidate fails to mention the use of language within the play, It is necessary to discuss various linguistic techniques, such as metaphors and smilies, in order to achieve a higher grade at this level. There are also a few issues with spelling and grammar throughout the essay, IÃ¢â‚¬â„¢m sure the candidate could have picked up on these if they had taken the time to carefully proof read their work. No-one expects youÃ¢â‚¬â„¢re work to be perfect, but try to take the time to read though and eliminate careless mistakes.