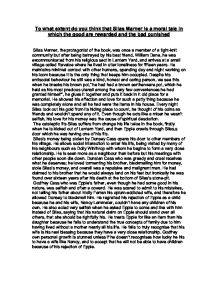 To what extent do you think that Silas Marner is a moral tale in which the good are rewarded and the bad punished.

To what extent do you think that Silas Marner is a moral tale in which the good are rewarded and the bad punished Silas Marner, the protagonist of the book, was once a member of a tight-knit community but after being betrayed by his best friend, William Dane, he was excommunicated from his religious sect in Lantern Yard, and arrives at a small village called Raveloe where he lived in utter loneliness for fifteen years. He maintains minimal contact with other humans, spending day and night working on his loom because it is the only thing that keeps him occupied. Despite his antisocial behaviour he still was a kind, honest and caring person, we see this when he breaks his brown pot," he had had a brown earthenware pot, which he held as his most precious utensil among the very few conveniences he had granted himself", he glues it together and puts it back in it old place for a memorial. ...read more.

Dunsten Cass who was greedy and cruel receives what he deserves; he loved tormenting his brother, blackmailing him for money, stole Silas's money, and overall was a repulsive and malignant man. He had claimed to his brother that he would always land on his feet but ironically he was found over sixteen years after his death at the bottom of Silas's stone-pit. Godfrey Cass who was Eppie's father, even though he had some good in his nature, was selfish and often a coward. He was scared to admit to his mistakes, not telling his father about Molly Farren his opium-addicted wife, and therefore he allowed Dunsey to blackmail him. He regretted his rejection of Eppie as a child because he and his wife, Nancy Lammeter, couldn't have any children of his own. He also acted very selfish when he asked Eppie to come and live with him instead of Silas, saying that his natural claim on Eppie should stand over all others, that she should be rightfully his. ...read more.

Nancy had always been good in her life and she is rewarded by having a good husband in Godfrey and high status in society in Raveloe. The arrival of Eppie in Silas's life puts a strong link from Silas to the rest of Raveloe. After sixteen years with Eppie we see that he is once again part of a tigh-knit society and is repected and liked by all. Silas starts going back to church accepting religion once again in his life, we are shown how Eliot dislikes religious sects such as in Lantern Yard and how the life of normal rural people, like in Raveloe, is much better. Eliot also shows us how industrialisation is taking over normal like, such as how Lantern Yard had completely disappeared. There is a lot in Silas Marner to suggest that it is a moral tale, Dunsey is punished, Silas is rewarded in the end, Godfrey has a bit of both. However it is only a moral tale to a certain extent, because why would Silas be punished in the first place and why did Nancy had to suffer because of Godfrey's mistakes. ...read more.