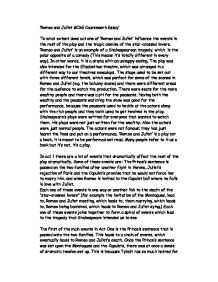 'To what extent does act one of 'Romeo and Juliet' influence the events in the rest of the play and the tragic demise of the star-crossed lovers.

'Romeo and Juliet GCSE Coursework Essay' 'To what extent does act one of 'Romeo and Juliet' influence the events in the rest of the play and the tragic demise of the star-crossed lovers. 'Romeo and Juliet' is an example of a Shakespearean tragedy, which is the polar opposite of a comedy (This means it's totally different in every way). In other words, it is a drama with an unhappy ending. The play was also intended for the Elizabethan theatre, which was arranged in a different way to our theatres nowadays. The stage used to be set out with three different levels, which was perfect for some of the scenes in Romeo and Juliet (e.g. the balcony scene) and there were different areas for the audience to watch the production. There were seats for the more wealthy people and there was a pit for the peasants. Having both the wealthy and the peasants watching the show was good for the performance, because the peasants used to heckle at the actors along with the rich people and they both used to get involved in the play. Shakespeare's plays were written for everyone that wanted to watch them. His plays were not just written for the wealthy. Also the actors were just normal people. The actors were not famous; they had just learnt the lines and put on a performance. ...read more.

An example of this is: 'But in that crystal scales let there be weighed Your lady's love against some other maid That I will show you shining at this feast, And she shall scant show well that now seems best. The whole audience knows what is going on, but Peter does not. Which makes it ironic? Every time Shakespeare makes a scene end with a concluding quatrain, they are almost always talking about love or feelings. He does this, because it makes the speech more poetic and romantic. It also gives off a romantic and poetic atmosphere to the audience. Peter is the reason that Romeo and Benvolio went to the party, thus making Peter the reason Romeo and Juliet met. If Peter had not bumped into Romeo and Benvolio, then they would not have gone to the party and Romeo would still have been in love with Rosaline. So Peter bumping into Romeo and Benvolio could be seen as fate or destiny When Romeo and Juliet meet and find out who each other are they arrange that they will marry the next day. Then Tybalt starts another fight between himself and the Montagues. This leads to Romeo's banishment. When Romeo and Juliet meet, there is a shared sonnet between them (Act 1 Scene 5, lines 92-105); "If I profane with my unworthiest hand This holy shrine, the gentle sin is this, My lips two blushing pilgrims' ready stand To smooth that rough touch with a tender kiss..." ...read more.

died Juliet suddenly woke from he sleep but to her horror He died next to her and she picked up his fallen sword and followed Romeo To his death. is scene is probably the most tragic and the most dramatic of the play because the audience think they will live happily ever after but they didn't because this was the most dramatic exit of the play. I believe this scene effects the audience because it is a sad moment because the to young lovers went thought a lot to be together and the only way for them to be together was in the after life which is a said thing because of there families feud there love was never meant to be this is why this is the scene the audience are most affected by the play also the at the end when the two families are outside the church grieving the prince suddenly says "come to this vault to die ,and lie with Juliet where to be there enemies ? Capulet, Montague see what a scourge is laid upon your hate. This quote says that because of the feud the two lovers took there live so they could be with each other but also at the end of the play the prince had one more thing to say. "For never was a story of more whoe then this of Juliet and her Romeo" ...read more.