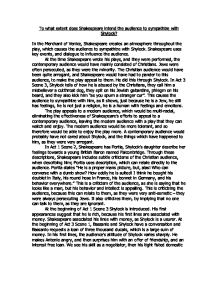 To what extent does Shakespeare intend the audience to sympathize with Shylock in the Merchant of Venice?

To what extent does Shakespeare intend the audience to sympathize with Shylock? In the Merchant of Venice, Shakespeare creates an atmosphere throughout the play, which causes the audience to sympathize with Shylock. Shakespeare uses key events, and dialogue to influence the audience. At the time Shakespeare wrote his plays, and they were performed, the contemporary audience would have mainly consisted of Christians. Jews were often persecuted, as they were the minority. The Christian audience would have been quite arrogant, and Shakespeare would have had to pander to this audience, to make the play appeal to them. He did this through Shylock. In Act 3 Scene 3, Shylock tells of how he is abused by the Christians, they call him a misbeliever a cutthroat dog, they spit on his Jewish gabardine, phlegm on his beard, and they also kick him "as you spurn a stranger cur". This causes the audience to sympathize with him, as it shows, just because he is a Jew, he still has feelings, he is not just a religion, he is a human with feelings and emotions. The play appeals to a modern audience, which would be multi-racial, eliminating the effectiveness of Shakespeare's efforts to appeal to a contemporary audience, leaving the modern audience with a play that they can watch and enjoy. ...read more.

He vows never to part with it, this is relevant to creating sympathy towards Shylock, by the contrast of Portia's events, opposed to the events in Shylock's life. Portia is living blissfully, just after becoming engaged, and Shylock has lost his daughter, whom he loves immensely and he is burning for revenge. The sympathy comes from the contrast between their lives. Jessica becomes a Christian, purely for material reasons, first and foremost to distance herself from her father, who takes great pride in being a Jew. She does this in the knowledge that he will be greatly hurt by this, and shows the extent that she will go to upset her father. Despite being chiefly Christian, this event would have made the contemporary audience feel sympathy towards Shylock, as they have got to know him, and understand his character. They would, care about what happens to Shylock and know that this would cause the most harm to him, as he takes great pride in his religion. Jessica's intentions of eloping to Christianity are finally revealed in Act 2 Scene 3, in a conversation with Launcelot. ...read more.

This play shows that Shakespeare can subtly manipulate the audiences minds without them noticing. This shows Shakespeare's brilliance. Shakespeare throughout the play is saying to the anti-semitic audience that they should treat the Jews how they themselves, want to be treated. Shylock is The Merchant of Venice's most noteworthy figure; you could interpret him as a bloodthirsty specter, a clownish Jewish stereotype, or a tragic figure whose sense of decency has been fractured by the persecution he endures. Certainly, Shylock is the play's antagonist, and he is menacing enough to imperil seriously the happiness of Venice's businessmen and young lovers alike. Shylock is also, however, a creation of circumstance, and even in his single-minded pursuit of a pound of flesh, his frequent mentions of the cruelty he has endured at Christian hands make it hard for us to label him a natural born monster. In one of Shakespeare's most famous monologues, Shylock argues that Jews are humans and calls his quest for vengeance the product of lessons taught to him by the cruelty of Venetian citizens. On the other hand, Shylock's coldly calculated attempt to revenge the wrongs done to him by murdering his persecutor, Antonio, prevents us from viewing him in a positive light. Shakespeare is therefore, intending the audience to sympathize with Shylock. By Jon Garland 101B ...read more.