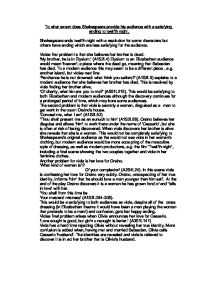 To what extent does Shakespeare provide his audience with a satisfying ending to twelfth night.

To what extent does Shakespeare provide his audience with a satisfying ending to twelfth night. Shakespeare ends twelfth night with a resolution for some characters but others have ending which are less satisfying for the audience. Violas first problem is that she believes her brother is dead. 'My brother, he is in Elysium.' (A1S2L4) Elysium to an Elizabethan audience would mean 'heaven'; a place where the dead go, meaning that Sebastian has died. To a modern audience this may seem to be a different place, e.g. another island, but violas next line 'Perchance he is not drowned: what think you sailors?' (A1S2L5) explains to a modern audience that she believes her brother has died. This is resolved by viola finding her brother alive, 'Of charity, what kin are you to me?' (A5S1L215). This would be satisfying to both Elizabethan and modern audiences although the discovery continues for a prolonged period of time, which may bore some audiences. The second problem is that viola is secretly a woman, disguised as a man to get work in the count Orsino's house. 'Conceal me, what I am' (A1S2L53) 'Thou shalt present me as an eunuch to him' (A1S2L56). Orsino believes her disguise and allows 'him' to work there under the name of 'Cessario', but she is often at risk of being discovered. When viola discovers her brother is alive she reveals that she is a woman. This would not be completely satisfying to Shakespeare's original audience as the would not see viola in her woman's clothing, but modern audience would be more accepting of the masculine style of dressing, as well as modern productions, e.g. ...read more.

Another Problem for Olivia is that Cessario refuses to love her. 'And that no woman has; nor never none Shall mistress be of it, save I alone' (A3S1L144-145) Cessario claims that no woman has 'his' heart but himself, hinting about her true identity. Olivia doesn't accept this and persists. Olivia asks Sebastian to marry her, thinking it is Cessario. She is embarrassed when the truth comes out, 'Betrothed to both a maid and a man' (A5S1L247) but is relieved that she married the man. 'Nature in her bias drew that.' (A5S1L244) meaning that it was fate that she happened to marry a man, rather than be deceived. This would satisfy an audience, and may make the Elizabethan audience laugh at Olivia's confusion when the man, playing a woman dress as a man (Viola/Cessario) reveals him/herself to be a woman. Olivia's final problem is Orsino, Sir Andrew and Malvolio are all trying to win her love. Orsino is constantly rejected, and Sir Andrew is so stupidly ridiculous that he fails to gain Olivia's attention, even for a moment, despite his firm belief that he is the one to win her over: But Malvolio, believing that Olivia loves him goes to her, as if mad, in yellow cross gartered and in yellow stockings. '"Wilt thou go to bed Malvolio?" "To bed? Ay, sweetheart, and I'll come to thee" "God comfort thee! Why does thou smile so and kiss thy hand so oft?"' (A3S4L27-30) ...read more.

Also, at the end of the play, Sir Toby snaps and tells him what he really thinks. 'Will you help - an ass-head, and a coxcomb, and a knave, a thin faced knave, a gull? (A5S1L190-191), and Sebastian leaves without saying anything else. This is more dissatisfying for modern audiences more that elziabethan audiences, as the modern audience would pity him and would want to see a reaction, whereas the elizabethan audience would laugh at the foolish man being told 'where to shove it', but wonder why the character has no real ending, but fades into the background. Sebastian comes in about halfway through the play, rescued by Antonio and believing that his sister is dead, 'For some hour before you took me from the breach of the sea was my sister drowned' (A2S1L14-15). He goes to orsinos court and is repeatedly mistaken for Cessario. When Olivia mistakes him for Cessario she proposes marriage to him 'Now go with me, and with this holy man Into the chantry by; there before him, And underneath that consecrated roof, Plight me the full assurance of your faith.' (A4S3L23-26). Confused, Sebastian accepts this offer and later Cessario is mistaken for Olivias husband. This causes chaos until Sebastian arrives and all is revealed. This would satisfy both audience as the chaos and confusion would be funny to both shakespearian people, and modern audiences. Antonio is a Fugitive in Illyria. He risks life to ensure sebastians safety. 'I have many enemies in Orsino's court' (A2S2L33) ...read more.