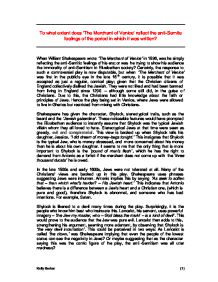 To what extent does 'The Merchant of Venice' reflect the anti-Semite feelings of the period in which it was written?

To what extent does 'The Merchant of Venice' reflect the anti-Semite feelings of the period in which it was written? When William Shakespeare wrote 'The Merchant of Venice' in 1596, was he simply reflecting the anti-Semitic feelings of his era; or was he trying to show his audience the immorality of anti-Semitism in Elizabethan society? Certainly, the response to such a controversial play is now disputable, but when 'The Merchant of Venice' was first in the public's eye in the late 16th century, it is possible that it was accepted as just a regular, comical play; given that the Christian citizens of England collectively disliked the Jewish. They were not liked and had been banned from living in England since 1290 - although some still did, in the guise of Christians. Due to this, the Christians had little knowledge about the faith or principles of Jews. Hence the play being set in Venice, where Jews were allowed to live in Ghettos but restricted from mixing with Christians. Shakespeare has given the character, Shylock, stereotypical traits, such as the beard and the 'Jewish gaberdine'. These noticeable features would have prompted the Elizabethan audience to instantly assume that Shylock was the typical Jewish villain whom they all loved to hate. ...read more.

to be in the presence of Christians. Possibly Shakespeare was hoping this would stir some sympathy in the audience, and they would finally grasp the idea that Jews were not as evil as previously thought. Shylock cites the bible many times in the play; he refers to bible stories to back up his opinions. When he is striking up a deal between himself and Antonio, he uses a scripture from Genesis 30 to justify why he is charging Antonio interest. His justification is: 'This was a way to thrive, and he was blest; // And thrift is blessing if men steal it not.' This could be seen as being a very far-fetched reason, which would mean that Shylock is narrow minded, who would provide any reason to con a bit more money out of Antonio. Antonio himself says that 'The devil can cite scripture for his purpose', insinuating that Shylock is greedy. But perhaps this is wrong, and Shakespeare was implying that Shylock was instead trying to reason with Antonio over mutual ground; the bible stories were one thing they both recognised and appreciated. Shylock seems to be the only character who sticks to his agreements. ...read more.

On the other hand, Shakespeare could have ended it as an anti-Semite - to show that good (Christianity) always triumphs over evil (Judaism). It could be argued that Shakespeare was an anti-Semite, or that the playwright thoroughly disliked anti-Semitism. We do not know. But my opinion is that Shakespeare identified and compared himself with his creation of 'the Jew'. As it is thought that Shakespeare was a secret Catholic (in a Protestant England), he would have known what it was like to have a different faith, and wished to show his point of view through a play. 'What judgement shall I dread, doing no wrong?' Shylock explained as he fought his corner. However, it is also likely that Shakespeare was a typical Elizabethan anti-Semite who hated all Jews; therefore made Shylock a dislikeable character. Shylock speaks of Antonio: 'I'll plague him, I'll torture him. I am glad of it.' Personally, I believe that Shakespeare wanted to show the harsh reality of anti-Semitism to his audience, and he thought that through the eyes of a Jew was the best way to do it. The play shows definite anti-Semitism in its characters, but in my opinion, 'The Merchant of Venice' is not anti-Semitic. ?? ?? ?? ?? (1) Kelly Barber ...read more.