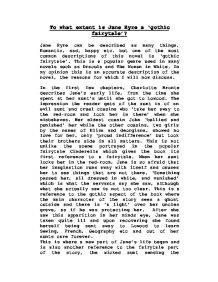 To what extent is Jane Eyre a 'gothic fairytale'?

To what extent is Jane Eyre a 'gothic fairytale'? Jane Eyre can be described as many things. Romantic, sad, happy etc. but one of the most common descriptions of this novel is 'gothic fairytale'. This is a popular genre used in many novels such as Dracula and The Woman in White. In my opinion this is an accurate description of the novel, the reasons for which I will now discuss. In the first few chapters, Charlotte Bronte describes Jane's early life, from the time she spent at her aunt's until she got to Lowood. The impression the reader gets of the aunt is of an evil aunt and cruel cousins who 'take her away to the red-room and lock her in there' when she misbehaves. Her eldest cousin John 'bullied and punished' her while the other cousins, two girls by the names of Eliza and Georgiana, showed no love for her, only 'proud indifference' but took their brothers side in all matters. This is not unlike the scene portrayed in the popular fairytale Cinderella which gives the book its first reference to a fairytale. When her aunt locks her in the red-room, Jane is so afraid that her imagination runs away with itself and causes her to see things that are not there. ...read more.

It is here where the beginning of the fairytale really begins, and all before it was merely a background on which the reader was to base opinions of the characters and gather knowledge of their pasts. The fact that Mr Rochester is playing such a game with Jane is typical of a fairytale, and in particular a gothic one, because it seems to be a cruel test, but also a necessary one. When Jane finds out that her gentleman friend is to be wed, and to such a cruel, cold-hearted lady such as Blanche Ingram, she is very distressed despite the fat that she has her doubts about the match - 'I felt he had not given her his love' 'she could not charm him'. On the occasion where there is a gypsy woman come to tell the fortunes of all the single young ladies in the house, it is the impression of the reader that surely, as it is with all good fairytales, Jane would go to see her. And, sure enough, Jane gets called hear the old ladies predictions. When she goes in she doesn't seem convinced, she even warns the 'old mother' by saying 'I have no faith'. The woman, instead of telling Jane's fortune, tries to nag her and cajole her into admitting her love for Mr Rochester. ...read more.

She then goes to his other house to find him and after a long discussion about how she found him and why he thought she was a ghost she discovers that he called to her 'Jane! Jane! Jane!' and heard back 'I am coming; wait for me' and 'where are you?' This makes the novel seem more like a fairytale than ever because they were miles apart when those words were being said but yet they could hear each other quite clearly. This is also gothic because it is quite spooky for the same reasons that it is a fairytale event. She goes back to him, only to find that Thornfield Hall has burned down and Mr Rochester 'stone - blind' and 'helpless, indeed - blind, and a cripple'. She seeks him out at his other home in Ferndean, they proceed to wed and, in the true fashion of fairytales, lived happily ever after, with Mr Rochester even regaining enough sight in his remaining eye to see his first-born child. In conclusion I have given all of the points that I think are important in order to explain how Jane Eyre is a gothic fairytale. As to what extent it is a gothic fairytale I can only use my own judgement and say I think it is to a large extent a gothic fairytale, although some parts of the story are not in keeping with that view. ...read more.