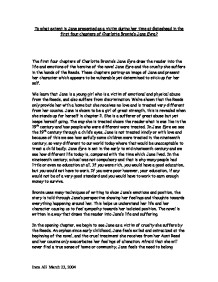 To what extent is Jane presented as a victim during her time at Gateshead in the first four chapters of Charlotte Bronte's Jane Eyre? The first four chapters of Charlotte Bronte's Jane Eyre draw the reader into the life and emotions of the heroine of the novel Jane Eyre and the cruelty she suffers in the hands of the Reeds. These chapters portray an image of Jane and present her character which appears to be vulnerable yet determined to stick up for her self. We learn that Jane is a young girl who is a victim of emotional and physical abuse from the Reeds, and also suffers from discrimination. We're shown that the Reeds only provide her with a home but she receives no love and is treated very different from her cousins. Jane is shown to be a girl of great strength, this is revealed when she stands up for herself in chapter 2. She is a sufferer of great abuse but yet keeps herself going. The way she is treated shows the reader what is was like in the 19th century and how people who were different were treated. In Jane Eyre we see the 19th century through a child's eyes, Jane is not treated kindly or with love and because of this we see how awfully some children were treated in the nineteenth century, so very different to our world today where that would be unacceptable to treat a child badly. ...read more.

She is an intelligent girl with many strong points such as trying to stick up for herself, having her own opinions and thoughts and also patient of the cruelty suffers. An example of her questioning and sticking up for herself is where she asks "what does Bessie say I have done" in an attempt to get answers. She is very determined and strong emotionally as she takes Johns bullying to a certain extent before fighting back. Her strong points also turn out to be her weaknesses which get her into trouble and make her defenceless. Jane is taken into the red room after retaliating with her cousin john. We see Mrs. Reed's cruelty when without any question of what happened she sends of for Jane to be locked up in the red room, "take her away....in there". Jane is treated like an animal here being locked up all on her own. During this incident, we learn more about Jane's character and the way she tries to fight back. The cruel extent on to which she is treated is shown as just a young girl left on her own in a dark room where her uncle died, this would cause many emotional and mental scars. Jane's emotional suffering and fears while she is in the red room are shown by the long complex sentences. ...read more.

Bronte presents Jane in many different ways as a victim, she is a victim of her social position as an orphan and how she isn't pretty enough to be treated kindly. She is very lonely and faces the cruelty she receives all on her own with no one to defend her, this shows that her character is very strong. Again, the social positions those days didn't allow the servants etc to stick up for her. Jane is the total opposite to what would have been expected of a girl in the society she lived in. she speaks her mind and is not pretty and also lashes out and fights back, she has her own personality and is strong willed, intelligent and imaginative outspoken. The qualities that she has don't match the qualities of what would have been expected of a girl in the 19th century. They were supposed to be quiet, pretty, intelligent and talented. Her strong points made her a victim of society. Jane creates respect for herself in the readers mind on how she tackles her problems and how she develops throughout the first few chapters. She defends herself completely on her own and keeps getting herself through everything. We begin to feel sympathy for what she's had to go through but we also see it in a positive way as her strengths will help her in the next difficult stages she may have to face. ?? ?? ?? ?? Iram Ali March 23, 2004 ...read more.