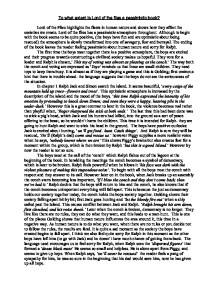 To what extent is Lord of the flies a pessimistic book?

To what extent is Lord of the flies a pessimistic book? Lord of the Flies highlights the flaws in human nature and shows how they affect the societies we create. Lord of the flies has a pessimistic atmosphere throughout. Although to begin with the book seems to be quite positive, (the boys have fun and are optimistic about being rescued) the atmosphere is slowly transformed into one of savagery, fear and betrayal. The ending of the book leaves the reader feeling pessimistic about human nature and sorry for Ralph. The first time the boys meet together there is a positive atmosphere, the boys are excited and their progress towards constructing a civilized society makes us hopeful. They vote for a leader and Ralph is chosen,' This toy of voting was almost as pleasing as the conch.' The way both the conch and voting are expressed as 'Toys' reminds us that these are small children. They need toys to keep them busy. It is almost as if they are playing a game and this is Golding; first ominous hint that there is trouble ahead- the language suggests that the boys do not see the seriousness of the situation. In chapter 1 Ralph Jack and Simon search the island. It seems beautiful, 'every coign of the mountain held up trees-flowers and trees'. This optimistic atmosphere is increased by the description of the island and the mood of the boys, 'this time Ralph expressed the intensity of his emotion by pretending to knock down Simon; and soon they were a happy, heaving pile in the under-dusk.' However this is a great contrast to later in the book, the violence becomes real rather than playful when, 'Roger sharpened the stick at both ends.' The last time this had been done was to stick a pig's head, which Jack and his hunters had killed, into the ground as a sort of peace offering to the beast, so he wouldn't harm the children. ...read more.

I think this is one reason the book is so negative. Simon is a glimmer of hope. Before his death, he is a point of optimism in the book. Golding creates an interesting character in Simon; he is contrasted strongly with the other boys (some more than others) and seems unique within the group. I think he contrasts most sharply with Roger. The way Roger and Simon are contrasted is effective, because it illustrates 'good' and evil' at two extremes, 'Roger led the way straight through the sand castles, kicking them over, burying flowers, scattering the chosen stones. (Then later on in the book) Roger sharpened a stick at both ends.' as he looked forward to his next kill (Ralph). In contrast Simon concentrates on building a community: 'All day I've been working with Simon. No one else.' Ralph tells us. They are also contrasted in their personal appearance,' the shock of black hair, down his nape and low on his forehead, seemed to suit his gloomy face and made what seemed at first unsociable remoteness into something forbidding.' However Simon is described as, 'a small, skinny vivid little boy and his eyes so bright that hey had deceived Ralph into thinking him something delightfully gay and wicked'. I think these contrasts dramatise the conflict between good and evil extremely well. Simon is presented as a type of Christ figure, and Roger a type of devil. Simon doesn't exactly fit in or have any close friends but is happy to help when he is needed. He is also kind to others and reaches down fruit for the littleuns. Simon is a symbol of humanity and goodness. He doesn't complain that he is the only one helping, he just gets on and does the job. It is a sad indictment on human nature that the other boys think he is 'batty'. Golding also uses Simon and his conversation with the pig's head to illustrate his theme. ...read more.

So we are left feeling sorry for Ralph and have a pessimistic view of human nature. Thus Lord of the Flies is a very pessimistic book. It reflects Golding's belief that everyone is fundamentally evil, (with occasional exceptions represented by Simon) and he shows in his book what happens when evil is free to run wild. This makes us wonder if such horrors could happen in our society. Moreover Golding shows us how the boys destroy their Island, just as we are destroying ours. To begin with the Island is beautiful, but by the end the Island was burnt and 'the sky was black'. Just as our world was beautiful in the beginning, and gradually we are destroying it by pollution. Even though there are points of optimism in the book in the shape of Ralph, Piggy and Simon, they all end the story hurt in some way, by the evil of mans nature. I think that the bleakness of this ending may not overly pessimistic view of life as there is obviously evil in the world, and also there is evil within man. I think Golding's point is quite a realistic one, society around us is shaped on the natures of the people with in it and how easily they are swayed or how manipulative they are. If they can manipulate many people they can do what they want and take control, however if a person is easily swayed they would make a weak leader. I found this book very interesting as it put forward many interesting views and questions. I found it quite pessimistic. I think this is because Golding concentrated on the flaws in mans nature rather that the positive aspects. Maybe this is because Golding thought that it is easier for man to do wrong than to do right and that the brutality within can come out with less effort then it takes to do good. Ralph certainly reflects my feelings when he 'wept for the end of innocence and the darkness of man's heart.' By Alice Madgwick 10J ...read more.