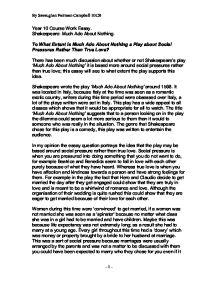 To What Extent is Much Ado About Nothing a Play about Social Pressures Rather Than True Love?

Year 10 Course Work Essay. Shakespeare: Much Ado About Nothing. To What Extent is Much Ado About Nothing a Play about Social Pressures Rather Than True Love? There has been much discussion about whether or not Shakespeare's play 'Much Ado About Nothing' it is based more around social pressures rather than true love; this essay will see to what extent the play supports this idea. Shakespeare wrote the play 'Much Ado About Nothing' around 1598. It was located in Italy, because Italy at the time was seen as a romantic exotic country, writers during this time period were obsessed over Italy, a lot of the plays written were set in Italy. This play has a wide appeal to all classes which shows that it would be appropriate for all to watch. The title 'Much Ado About Nothing' suggests that to a person looking on in the play the dilemma could seem a lot more serious to them than it would to someone who was really in the situation. The genre that Shakespeare chose for this play is a comedy, this play was written to entertain the audience. In my opinion the essay question portrays the idea that the play may be based around social pressure rather than true love. ...read more.

Hero was like the exact replica that women were expected to be during this time. Hero was beautiful, a maid, gentle and pure. In the wedding scene the way Claudio lashes out at Hero is quite outrageous, if he loved Hero then why would he lash out at her without giving her a chance to explain. The way Hero reacts to this shows that she is in complete awe over what is happening to her, this was meant to be her wedding day the most memorable day in her life. Claudio only acts this way because of what he thinks he has seen in her bedroom window, Don John the evil brother of Don Pedro has blinded him. The way Claudio reacts to this was wrong he could have confronted Hero in a different way by talking to her before the ceremony actually began, this would cause less embarrassment on Hero and on her father. The way Claudio reacts could have been caused because he is love with her so much that he is shocked by what she has done to him, he feels that she has betrayed him even before they are married. Leonato's reaction at this time is very justified during the time period of 'Much Ado' women who were not pure or a 'maid' as they were called, was frowned upon. ...read more.

During the play Benedick is continuously talking about Beatrice's age and why she is not yet married this could be used against her in order for to start thinking about marriage. Beatrice and Benedick seem to have been pushed in the right direction but this was the only factor that actually made them fall in love with each other. As for Claudio and Hero they were already in love with each other but this stands to question, if they were really in love wouldn't Claudio have believed that Hero would not betray him and wouldn't he try to hear her out. This could prove that they were not totally in love with each other but just together for the sake of having a relationship. However this could just be because he is so shocked at what he thinks he has seen that he just rages out with anger and doesn't even think to stop and ask her. Therefore compared to Beatrice and Benedick, Hero and Claudio's relationship is based more heavily on true love than social pressures. Whereas Beatrice and Benedick seem to have a relationship based around social pressures rather than anything else. By Savaughan Fairman-Campbell 10CB - 1 - ...read more.