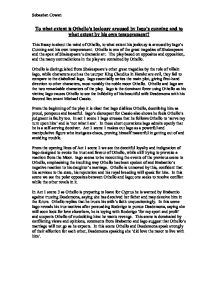 To what extent is Othello's jealousy aroused by Iago's cunning and to what extent by his own temperament? This Essay is about the mind of Othello, to what extent his jealousy is aroused by Iago's Cunning and his own temperament. Othello is one of the great tragedies of Shakespeare and the apex of Shakespeare's dramatic art. The play based on opposites and opposition, and the many contradictions in the play are contained by Othello. Othello is distinguished from Shakespeare's other great tragedies by the role of villain Iago, while characters such as the usurper King Claudius in Hamlet are evil, they fail to compare to the diabolical Iago. Iago essentially writes the main plot, giving first-hand direction to other characters, most notably the noble moor Othello. Othello and Iago are the two remarkable characters of the play. Iago is the dominant force using Othello as his victim; Iago causes Othello to see the Infidelity of his beautiful wife Desdemona with his favored lieutenant Michael Cassio. From the beginning of the play it is clear that Iago dislikes Othello, describing him as proud, pompous and boastful. Iago's disrespect for Cassio also shows he feels Othello's judgment is faulty too. In act 1 scene 1 Iago stresses that he follows Othello to 'serve my turn upon him' and is 'not what I am'. In these short quotations Iago admits openly that he is a self-serving deceiver. ...read more.

Iago not only shows reluctance to voice his opinions, he also says that he hopes his suspicions are unjustified (147-157). Othello makes Iago's manipulation easier, he introduces the subject of his wife when he is warned about jealousy, Iago is suggesting the topics for consideration, but Othello takes it all in and jumps to false conclusions. Iago having set the scene with generalities, now chips away at the specifics, reminding Othello of his wife's deceiving behavior in marrying Othello, the painful reminder that he is an outsider and the alarming reminder that it was unusual for Desdemona to choose Othello when there were more natural choices she could have made. Iago continues the pretence of his friendship with Cassio, making his reluctance to speak more plausible. This scene shows the power of silence, Iago already knowing that his poison has taken hold of Othello's mind is confident enough to make precise suggestions for Othello to follow, leaving his victim alone in his misery for a moment before dealing him further blows. In the final part of the scene we see further proof of Iago's quick-witted opportunism. Iago tells a false story of Cassio's lustful dream and asks a leading question about the handkerchief. Then with Othello's mind set on revenge, Iago reverts to the role of loving and loyal assistant and friend. There is horrible irony here that by seeking to kill Cassio, Othello is carrying out Iago's revenge for him. ...read more.

In Othello's mind his wife is dead already he speaks of a rose withering on a tree then says 'be thus when thou art dead and I we kill thee/ and love thee after', this shows his determination but also his pain and reluctance. At the moment that kills her, he is still obsessing over the handkerchief; he uses Iago's crude language, suggesting that he should not be viewed as the sole perpetrator. Othello's confusion; is seen at line 90, where his speech is disjointed. It is completed by a cry of pain 'my wife, my wife, what wife? I have no wife; / O, insupportable! O heavy hour! In this final scene of the play Iago says less than in any other scene. He does not seem diminished by the unveiling of his crimes, he gloats to Othello saying 'I bleed, sir, but not killed'. Iago's final acts are brutal and unnatural. There is Irony in the fact that he kills his wife to preserve is honour, same as Othello. The Imagery associated throughout the play with the theme jealousy suggests the destructive qualities of the emotion. It is referred to as 'the green-eyed monster, which doth mock/ the meat it feeds on', 'a monster/ Begot upon itself, born on itself, born on itself'. There is a strong sense of devouring in these images, fitting in with Iago's description of Othello as being 'eaten up with passion'. These lines signify the issue of Othello's jealousy, once he has been convinced of his wife's unfaithfulness; it leads him to behave monstrously. ?? ?? ?? ?? Sebastian Cowan ...read more.