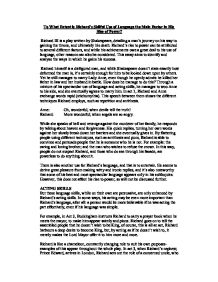 To What Extent is Richard's Skilful Use of Language the Main Factor in His Rise of Power?

To What Extent is Richard's Skilful Use of Language the Main Factor in His Rise of Power? Richard III is a play written by Shakespeare, detailing a man's journey on his way to gaining the throne, and ultimately his death. Richard's rise to power can be attributed to several different factors, and while his achievements owe a great deal to his use of language, other reasons can also be considered. This essay aims to identify and analyse the ways in which he gains his success. Richard himself is a disfigured man, and while Shakespeare doesn't state exactly how deformed the man is, it's certainly enough for him to be looked down upon by others. Yet he still manages to marry Lady Anne, even though he openly admits he killed her father in law and her husband in battle. How does he manage to do this? Through a mixture of his spectacular use of language and acting skills, he manages to woo Anne to his side, and she eventually agrees to marry him. ...read more.

For example, in Act 3, Buckingham instructs Richard to carry a prayer book when he meets the mayor, to make him appear saintly and pious. Richard goes on to tell the assembled people that he doesn't wish to be King, of course, this is all an act, Richard harbours a deep desire to become King, but, by acting as if he doesn't wish to, it merely makes the Lord Mayor offer it to him more and more. Richard is like a chameleon, constantly changing role to suit his own purposes-examples of this appear throughout the whole play. In act 3, when Richard's nephew; Prince Edward, arrives in London, Richard acts out the role of a concerned uncle, who warns him against the danger of Edward's other uncles. In fact, it is Richard who he should be wary of, since it was he who disposed of his own brothers. MACHIAVELLIANISM Machiavellianism is the belief that no matter what the means are, it just justifies the end. ...read more.

his own mother, none of them are in a position to do anything about it, instead, it is the men who are fooled by his wit and charm. They are na�ve and gullible; and are easily fooled by Richard's charm and wit. Even when Clarence is told that Richard has ordered his death, he refuses to believe them. Second Murderer: You are deceived. Your brother Gloucester hates you Clarence: Oh, no, he loves me, and he holds me dear CONCLUSION In conclusion, while Richard's rise of power owes a great deal to his use of language, I believe it is his machiavellianism and ruthlessness which are the crucial factors to him gaining the crown. Without it, Clarence would have become King instead, unless Richard had removed him. By eliminating all his opponents to the throne, Richard ensured that he himself would gain it. But this is not to say we should disregard the other factors, for they all contributed to Richard's rise of power, and in my opinion, without one of the factors I have named, he would have failed in his attempts to become King. ...read more.