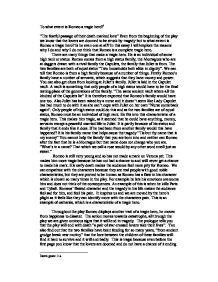 To what extent is Romeo a tragic hero?

To what extent is Romeo a tragic hero?1 "The fearful passage of their death-marked love" Even from the beginning of the play we know that the lovers are doomed to be struck by tragedy but to what extent is Romeo a tragic hero? Is he even one at all? In this essay I will explore the reasons why I do and why I do not think that Romeo is a complete tragic hero. There are many things that make a tragic hero. He is an individual of some high rank or status. Romeo comes from a high status family, the Montagues who are at daggers drawn with a rival family the Capulets, the family that Juliet is from. The two families are both of equal status "Two households both alike in dignity". We can tell that Romeo is from a high family because of a number of things. Firstly Romeo's family have a number of servants, which suggests that they have money and power. You can also get clues from looking at Juliet's family. Juliet is laid in the Capulet vault. A vault is something that only people of a high status would have to be the final resting place of the generations of the family. "The same ancient vault where all the kindred of the Capulets lie" It is therefore expected that Romeo's family would have one too. Also Juliet has been raised by a nurse and it doesn't seem like Lady Capulet has had much to do with it as she can't cope with Juliet on her own "Nurse come back again". Only people of high status could do this and as the two families are of equal status, Romeo must be an individual of high rank. He fits into this characteristic of a tragic hero. This makes him tragic, as it seemed that he could have anything, money, servants except a peaceful married life to Juliet. ...read more.

Fate can be blamed for their deaths. All throughout the play there are references of this "the yoke of inauspicious" Even the prologue suggests this "star-crossed lovers. The language used all points to this being a major influence in their deaths. Fate is such a big part in the play that when Juliet tempted it you knew that it was not a good sign. When Lady Capulet thinks that Juliet is crying over Tybalts' death Juliet and wishes Romeo dead Juliet not only agrees with her but she also makes a point of how she wants him dead too. "Indeed I never shall be satisfied With Romeo until I behold him-dead". This is tempting fate and is not a wise thing to do. Again it is almost by the ending as though she got her wish of seeing him dead. In some ways I think that Romeo is quite courageous and this is a quality demonstraited by tragic Heroes. He knows that the families are feuding, but when Tybalt tries to start a fight he stretches out the hand of peace to him. Mercutio, Romeos' best friend really wants to fight Tybalt, "draw Benvolio and bid down their weapons" and Romeo shows courage by standing up to peer pressure by refusing to fight, even thought Mercutio will be disgusted by it, "O calm, dishonourable, vile submission" this is a very hard thing to do. He also shows the sort of courage when he kills himself. It is a very scary thing to do, but he overcomes his fear and does it. However you may feel about this, courage is about overcoming fear and showing bravery, and that is exactly what Romeo did. Particularly as Romeos always talks about his feelings and never does anything about them. An example of this is when he was in love with Rosaline he was always talking about love and dragging everybody else down. ...read more.

Romeo's hastiness and passion get the better of him when he kills Tybalt and that leads to their deaths The feud could also be to blame. The two families struggle for power and the two families grow up hating each other. Tybalt feels that the "honour of my kin" has been insulted by Romeo's presence at the feast. Because of this Mercutio dies and Romeo is provoked into "Fire-eyed fury" and enacts revenge upon Tybalt, which leads to their deaths. Also if the families were not feuding Romeo and Juliet would just have been able to share their love in the open and marry with the parental consent Apart from the feud they would probably Capulet and Lady Capulet would probably think Romeo a good match for Juliet as he was from a high status family just like the Capulets. The two fathers also share a part in the blame. It seems that the fathers hold absolute sway over their daughters. They may give them to whomever they chose and are insulted if the daughters choose otherwise. Juliet makes that choice and incurs the wrath of Capulet "....go with Paris to Saint Peters church or I will drag thee on a hurdle hither!" He forces Juliet to marry Paris which makes her in desperation take the potion which leads to their deaths so in a way the male dominated society is to blame. I believe that Romeo is a tragic hero as he displays throughout the play many characteristics of one. He is an individual of high status, the audience is moved by his plight, he has a tragic flaw in his character that leads to his death and shows arrogance. He also shows courage and is not completely virtuous nor evil and he is involved in a struggle with fate. However I also think that other factors like the male dominated society, the feud and fortune can be blamed for the death of Romeo and Juliet and that the other characters also played apart in this tragedy Dawn grant 11s ...read more.