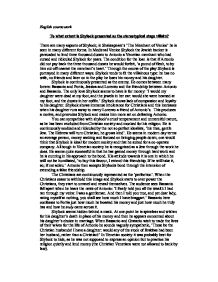 To what extent is Shylock presented as the stereotypical stage villain?

English coursework To what extent is Shylock presented as the stereotypical stage villain? There are many aspects of Shylock; in Shakespeare's 'The Merchant of Venice' he is seen in many different forms. In Medieval Venice Shylock the Jewish banker is persuaded to lend three thousand ducats to Antonio a Venetian merchant who had cursed and ridiculed Shylock for years. The condition for the loan is that if Antonio did not pay back the three thousand ducats he would forfeit, 'a pound of flesh, to by him cut off nearest the merchant's heart.' Through the course of the play Shylock is portrayed in many different ways. Shylock tends to fit the villainous type: he has no wife, no friends and later on in the play he loses his money and his daughter. Shylock is continuously presented as the enemy. He comes between many lovers: Bassanio and Portia, Jessica and Lorenzo and the friendship between Antonio and Bassanio. The only love Shylock seems to have is for money: 'I would my daughter were dead at my foot, and the jewels in her ear: would she were hearsed at my foot, and the ducats in her coffin.' ...read more.

Bassanio here confesses to Portia just how much he boasted his money and just how much he truly has and how he truly came across it. Shylock seems hidden behind a mask. At one point he is spineless and wishes for his daughter's death in place of his money and then he appears concerned about his daughter's choice in marriage. When Bassanio and Gratanio wish to trade the lives of their wives for the life of Antonio he sounds vaguely sympathetic, 'These be the Christian husbands! I have a daughter: would any of the stock of Brabbas had been her husband, rather than a Christian!' In Venetian society it was probably best for Shylock to hide, as he was not supposed to express an opinion but to practice his religion quietly and lend money (the Christian Venetians were not allowed to bank by law). Shylock is portrayed as everything a Christian is not; he is money-possessive and shows no human feelings or emotions. The Venetian Christians give the impression of being idealistic citizens, in the way that they are the majority religion and show their religion freely. ...read more.

He describes Portia through her fortune and then her beauty. Even then he still appears a bit vein by only commenting on her looks and money. Shakespeare manages to trap the audience into believing that the Christian's perfect life is always so, he then turns this all upside down and makes the play very realistic like an insight to real life, the audience sees the characters develop and watch as they all start to feel hate, sorrow, fear and anguish. At the beginning Antonio and Portia are very self pitying. Antonio appears very pathetic when he says, 'In sooth I know not why I am so sad,' he seems attention seeking. Portia overemotional about her life, 'by my troth, Nerissa, my little body is aweary of this great world.' This is again attention seeking. In 'the Merchant of Venice' Shakespeare is continuously creating falsehoods between the characters. He also creates bonds and barriers between friends and lovers. By doing so he keeps the audience in ravelled in the play. Shakespeare portrays Shylock excellently and develops his character to be a hateable and disposable character, whilst making it easy for the audience to sympathise. Jessica Woodward ...read more.