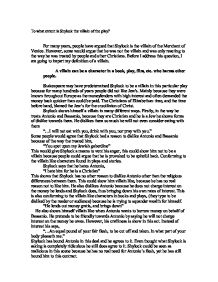 To what extent is Shylock the villain of the play?

To what extent is Shylock the villain of the play? For many years, people have argued that Shylock is the villain of the Merchant of Venice. However, some would argue that he was not the villain and was only reacting to the way he was treated by people and other Christians. Before I address this question, I am going to impart my definition of a villain. A villain can be a character in a book, play, film, etc. who harms other people. Shakespeare may have predetermined Shylock to be a villain in this particular play because for many hundreds of years people did not like Jew's. Mainly because they were known throughout Europe as the moneylenders with high interest and often demanded the money back quicker than could be paid. The Christians of Elizabethan time, and the time before hand, blamed the Jew's for the crucifixion of Christ. ...read more.

This could show him villain like, because he has no real reason not to like him. He also dislikes Antonio because he does not charge interest on the money he lends and Shylock does, thus bringing down his own rates of interest. This is also conforming to the villain like characters in books and plays, (they type to be disliked by the reader or audience) because he is trying to squander wealth for himself. "He lends out money gratis, and brings down" He also shows himself villain like when Antonio wants to borrow money on behalf of Bassanio. He pretends to be friendly towards Antonio by saying he will not charge interest on the money he owes. However, his craftiness is show in this act. Instead of interest his says, "...An equal pound of your fair flesh, to be cut off and taken. In what part of your body pleaseth me." Shylock has bound Antonio in this deal and he agrees to it. ...read more.

The jewels in her ears could be a symbol of her being a true Jewish woman, as many of them were found to have their ears pierced. Moreover, the fact that Shylock does indeed seem more affected by the loss of his money and jewels shows him acting contemptible. In my personal view of Shylock, he appears to be hurt deeply by the harsh remarks of his peers, "God made him, and therefore let him pass for a man." he is also described as "a goodly apple rotten at the heart" This shows that people many not have liked him very much. More so that Antonio dislikes him than anyone else, he maybe because Shylock is a Jew. In the same way, Shylock dislikes Antonio because he is a Christian. However, Shylock my have felt alienated from others because he was "different". Although he was a cruel man, he was, in part, driven to be villainous because his daughter ran away with a Christian and also of the treatment given to him by people he came into contact with. ...read more.

The candidate has written a good introduction, they define what is meant by a villain, introduce Shylock as character and describe why Jews were so disliked at the time this play was written. The only improvement needed would be to ...

The candidate has written a good introduction, they define what is meant by a villain, introduce Shylock as character and describe why Jews were so disliked at the time this play was written. The only improvement needed would be to state what they planed to discuss. The candidates response to the question is clear and they have given personal opinions when discussing weather or not they believe Shylock to be a villain.

The candidate mentions keys points from the play to back up their opinions without simple retelling the story, which shows a good understanding of how this type of essay should be written. Though they have occasionally mentioned how they think Shylock feels or what he might be thinking, more of these points are required for a stronger level of analysis. Additionally the candidate shows evidence of independent research as they have mentioned facts related to the way in which the Jewish people were treated in the time this play was written, this shows the candidates interest in the play and makes their essay more enjoyable to read. Finally the candidates attempt to conclude this essay is adequate, they state weather or not they think Shylock is a villain, thus answering the set question and they go on to give reasons based on personal opinions. The only thing missing is a summary of the candidates key points and ideas. A strong conclusion is important as it brings the essay to a close and gives you a chance to leave the reader with a good impression.

Unfortunately the candidate fails to mention the use of language within the play, It is necessary to discuss various linguistic techniques, such as metaphors and smilies, in order to achieve a higher grade at this level. However the candidates uses a good range of vocabulary and there are few if any spelling or grammatical errors. The layout of the essay is a little confusing, the candidate needs to make sure that there are clear paragraphs, rather than odd sentences here and there. You should start a new paragraph each time you discuss a different topic.