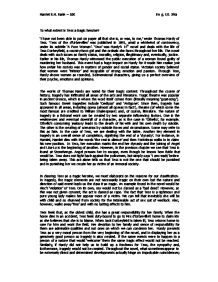 To what extent is Tess a tragic heroine? Thomas Hardy - Tess of the d'Urbervilles

To what extent is Tess a tragic heroine? 'I have not been able to put on paper all that she is, or was, to me,' wrote Thomas Hardy of Tess. 'Tess of the d'Urbervilles' was published in 1891, amid a whirlwind of controversy, under its subtitle 'A Pure Woman'. 'Tess' was Hardy's 14th novel and deals with the life of Tess Durbeyfield, a country-born girl and the ordeals she faces throughout her life. The novel deals with such issues as family status, morality, religion, illegitimacy and, eventually, justice. Earlier in his life, Thomas Hardy witnessed the public execution of a woman found guilty of murdering her husband. This event had a huge impact on Hardy for it made him realise just how unfair his society was in matters of gender and social status. Victorian society believed that women were 'inferior' and incapable of strong emotion and passion. Through Tess, Hardy shows women as rounded, 3-dimensional characters, giving us a perfect overview of their psyche, emotions and opinions. The works of Thomas Hardy are noted for their tragic content. Throughout the course of history, tragedy has infiltrated all areas of the arts and literature. Tragic theatre was popular in ancient Greece, which is where the word itself comes from (literally meaning 'goat-song'). ...read more.

However, as this was not given consent, the act is classed as rape. The fact that Tess is a righteous and pure young lady makes her appear more of a victim. We can tell that inevitably she will be with child and so shunned from society for the intolerable act of sex out of wedlock. Alec, however, walks away 'free' and with no lasting effects to him. Tess feels that, as the oldest child, she has a great responsibility for her family. When the horse dies in an accident, Tess feels duty-bound to go to Mrs d'Urberville's home to claim kin as she believes that she is to blame. When Jack Durbeyfield is taken ill, Tess returns home to care for him and work the field. Her devotion to her family and sense of responsibility for them are admirable qualities and not ones on which we can condemn her. Hardy presents Tess as a very moral person from the very beginning of the novel, and in displaying her as a genuinely good person so tragedy is also created. If the same events were to happen to a person of a nature that would 'welcome' them the same tragic effect would not be reached. ...read more.

Later in the novel when Alec and Tess meet, he proposes to her. When she rejects him, he shouts 'has not a sense of what is morally right any weight with you!' This is extremely ironic, as we know that Tess is a virtuous woman and that Alec is the one with no sense of morality. Throughout the novel, certain characters are used to reflect issues in 19th century society. For example, Sorrow, Tess's illegitimate son, is used to show the attitudes of society on illegitimacy and unmarried sex. Tess believes that Sorrow's illness is the result of being an illegitimate child and, knowing that he is dying, baptises the baby herself so that he may be 'fit' to go to heaven. The name itself is symbolic, as Sorrow is the physical entity 'born out of the cause of Tess's own sorrow'. The presentation of Alec as, to put it bluntly, an arrogant and immoral rapist reflects society's attitude towards women. Tess is condemned, although she is innocent, because of her gender while the immoral Alec walks free, regardless of his crime. This novel also emphasises the ideas of marriage in the 19th century. After her confession, Tess expects Angel to divorce her but at hearing her suggestion he replies 'How can you be so simple! How can I divorce you?' echoing the 19th century ideas that divorce was an unforgivable thing. ...read more.