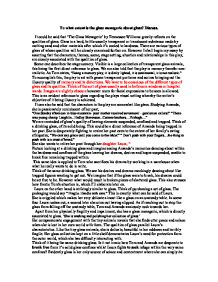 To what extent is the glass menagerie about glass? Discuss.

To what extent is the glass menagerie about glass? Discuss. It could be said that 'The Glass Menagerie' by Tennessee Williams greatly reflects on the qualities of glass. Glass is a hard, brittle usually transparent or translucent substance made by melting sand and other materials after which it's cooled to hardness. There are various types of glass of whose qualities will be closely examined further on. However I shall begin my essay by asserting that the characters, themes, scene, stage setting, situation and relationships in this play, are closely associated with the qualities of glass. Scene one describes the stage scenery. Visible is a large collection of transparent glass animals, this being the first direct reference to glass. We are also told that the play is memory therefor non-realistic. As Tom states, "Being a memory play, it is dimly lighted, it is sentimental, it is not realistic." To accomplish this, the play is set with gauze transparent portieres and scrims bringing out the illusory quality of memory and its distortions. We have to be conscious of the different types of glass and its qualities. Think of the sort of glass usually used in bathroom windows or hospital wards. Images are slightly obscure however room for facial expressions to be seen is allowed. ...read more.

Evidently glass is her only source of solace and contentment where she can simply be. Hypothetically, we can also look at Laura's situation as being the big glass bowl. Her mother and brother being the volatile liquid content in the glass bowl. 'They are quarreling... Laura with clenched hands and panicky expression.' It can be compared with the scientific theory of glass being sensitive to temperature changes. Put hot liquid in a glass, it will immediately heat up and vice versa. Therefore the immediate effects of Amanda and Tom's tensions or outbursts directly affect Laura. The glass bowl however tries to perhaps desperately settle or cool the escalating tension and anger in scene one; "Yes but let her talk," but fails in scene three when tom's frustration reaches a climax and he hurls his coat across the room. It strikes the shelf of Laura's glass collection; there is a tinkle of shattering glass. Similarly glass has a characteristic of breaking if exposed to extreme temperatures (freezing or boiling temperatures.) This reflects directly on Laura's sensitive and delicate nature (like glass), as she cries out as if wounded. Laura's purity can also be related to glass. She is mentally engrossed by her glass collection, which remains powerfully existent as her source of solace. ...read more.

This is the case with Tom and Amanda. However, even though they are quite similar and both see through each other, they stand individually apart; like glass its elements remain unchanged even if broken. This is the evident reason of conflict between them both suggesting everlasting peace is unattainable. The confining, enclosed quality of glass suggests that Tom and Laura have difficulty expressing their inner self to their mother. This emphasizes the distance between Amanda and her children. Tom can't openly write when his mother is there just as Laura's glass polishing is interrupted by the appearance of Amanda. She could be described as a prison guard resulting to her children's honest feelings, dreams and desires remaining confined and inexpressible to her. In conclusion, I also think 'The glass menagerie,' is an effective title for the play. The play does reflect on Laura's fragility and necessity to grasp the non-existent world of her animal collection from which she seeks complete refuge. For this to exist, she greatly depends on her mother and brother. The glass menagerie is very important for Laura and ironically her happiness or unhappiness affects the rest. That is to say, if Tom does walk out, it will destroy her fragile glass menagerie, her source of peace and solace. Destroying hers would probably destroy his mental state of peace and solace as well. Perhaps this is the idea the play revolves around. ...read more.