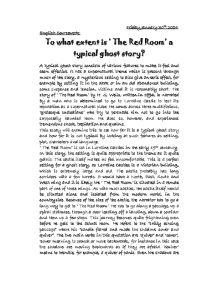 To what extent is ' The Red Room' a typical ghost story?

Friday January 30th 2004 English Coursework: To what extent is ' The Red Room' a typical ghost story? A typical ghost story consists of various features to make it feel and seem effective. It has a supernatural theme which is present through much of the story, a mysterious setting to also give an eerie effect, for example by setting it in the dark or in an old abandoned building, some suspense and tension, victims and it is reasonably short. The story of ' The Red Room' by H .G. Wells, written in 1896, is narrated by a man who is determined to go to Lorraine Castle to test its reputation as a supernatural place. He comes across three multifarious, 'grotesque custodians' who try to persuade him not to go into the supposedly haunted room. He does so, however, and experiences tremendous shock, trepidation and qualms. This essay will examine this to see how far it is a typical ghost story and how far it is not typical by looking at such features as setting, plot, characters and language. ' The Red Room' is set in Lorraine Castles in the early 19th centaury. In this story, the setting is quite appropriate to the theme as it quite gothic. The castle itself makes us feel uncomfortable. This is a perfect setting for a ghost story, as Lorraine Castles is a Victorian building, which is extremely large and old. The castle probably has long corridors with a few turrets. It would have a North, East, South and West wing and it is likely the ' The Red Room' is situated in a remote part of one of these wings. ...read more.

' Sombre' means dark. He collects another ten candles from outside and lights them to reassure himself, but even with seventeen candles alight he still does not feel comfortable: " Even with that, however, the brooding expectation of the vigil weighed heavily upon me." When the first candle in the alcove suddenly goes out, he is quite confused and goes on to relight it, only to find that another candle on the wall in front of him goes out, as well as two others. He thinks he must have caused this by the draught of his own body walking by. Now the terror really begins as the candles start to go out as fast as he can relight them. He is losing this battle with fear: " My hands trembled so much that twice, I missed the rough paper of the matchbox." Although there is a logical explanation foe these candles going out, the narrator feels there is an evil presence lurking about: " an invisible hand seemed to sweep out the two candles on the table." The invisible hand is something that we might well expect to find in a typical ghost story, but the word ' seemed' makes it clear that in this story it is the narrator's imagination that causes him to think of the hand: there is no such thing rally. So it can be seen that this story has all the apparatus of a ghost story apart from an actual ghost. Being a rationalist, the narrator puts down the Dukes death to ' apoplexy': " Lorraine Castle, in which the young duke had died. ...read more.

Though the custodians don't understand the rational explanation offered to them and still insist that the castle is cursed, the reader, empathising with the narrator, may find this ending disappointing as the story itself was leading towards something weird, and hideous, whereas it only turned out to be about fear, fear of darkness. This story is mostly telling us about the power of fear and how it takes control of our minds. The author H. G. Wells was famous for his, science fiction stories such as ' The Time Machine', which have some kind of scientific basis. He did not believe in the irrational and is trying to show in ' The Re Room' that the seeming supernatural has a rational explanation, that it is created by suggestions working on a persons mind. This is in a more scientific approach, and helps to explain why ' The Red Room' is not a typical ghost story. The Readers answer to this question about ' To what extent is " The Red Room" a typical ghost story' but it is missing one main criterion, which is a ghost. Despite the fact that there is no ghost in this story, it still seems effective as all the other features like the old furniture, the lack of electricity, the gloomy castle itself and the tension created during his journey to and in ' The Red Room' clearly set an atmosphere appropriate to a ghost story. So as a conclusion, the reader may say that although in some regards, the story does not seem like a typical ghost story, in other ways it has many of the features associated with one and because of this, the reader will certainly feel that they have read a ghost story even though the horror is psychological rather than truly ghostly. By Vibi Rajkumar 10GO!!!!!! ...read more.