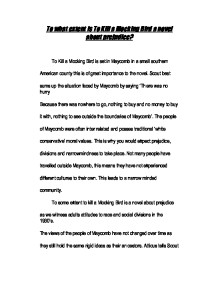 To what extent is To Kill a Mocking Bird a novel about prejudice?

To what extent is To Kill a Mocking Bird a novel about prejudice? To Kill a Mocking Bird is set in Maycomb in a small southern American county this is of great importance to the novel. Scout best sums up the situation faced by Maycomb by saying 'There was no hurry Because there was nowhere to go, nothing to buy and no money to buy it with, nothing to see outside the boundaries of Maycomb'. The people of Maycomb were often inter related and posses traditional 'white conservative' moral values. This is why you would expect prejudice, divisions and narrowmindness to take place. Not many people have travelled outside Maycomb, this means they have not experienced different cultures to their own. This leads to a narrow minded community. To some extent to kill a Mocking Bird is a novel about prejudice as we witness adults attitudes to race and social divisions in the 1930's. The views of the people of Maycomb have not changed over time as they still hold the same rigid ideas as their ancestors. Atticus tells Scout 'You might hear some ugly talk about it (Atticus' case), but do one thing for me if you will: you just hold your head high and keep those fists down'. The people of Maycomb take their anger, of defending Tom Robinson out on Scout. ...read more.

The Whites like to dominate the Blacks as they show little respect for their place of Worship. Through out the novel there is great prejudice and divisions between the whole town and Boo Radley. Boo Radley is portrayed as a 'Six and a half foot blood stained animal which will haunt the 'old tired town of Maycomb'. He is described as 'dining on raw squirrels and any cats he could catch' he is also described as having 'a long jagged scar that ran across his face; what teeth he had were yellow and rotten; his eyes popped, and he drooled most of the time'. The Radleys house was eary and nobody dared even to put their little toe into the Radleys front garden. The yard that surrounded the house was wild and overgrown. Boo Radley is perceived as an unsociable withdrawn character. Scout has a great deal of prejudice towards Boo Radley but after the trail her feelings change, as she has matured she sees Boo for who he really is. We see that Scout is no longer afraid as she takes 'him by the hand, a hand surprisingly warm for it's whiteness'. Scout has over come her prejudice unlike much of the society of Maycomb. Both Tom and Boo Radley can be compared to a Mocking Bird as they are both gentle, innocent people. ...read more.

'No economic fluctuations changed their status People like the Ewells lived as guests of the country in prosperity as well as in the depths of depression' this is an example of many people not liking the Ewells because of their lazy attitude and economic position. The Ewells were perceived as a lower class of white people. They were commonly referred to as 'trash' they were seen 'as the bottom of the social strata'. The main reasons for prejudice towards the Ewells is that the people of Maycomb believed that white people should not get involved with blacks, but Mayella broke this rule. Mayella did not intend to hurt Tom she was lonely and only wanted To seek affection. Mayella does not see blacks the same as the rest of Maycomb. 'There are four kinds of folk in the world. There's the ordinary kind like the neighbours, there and us's the kind like the Cunningham's out in the woods, the kind likes the Ewells down at the dumps and the Negroes'. The blacks are still shown below everybody else this shows the social barriers, which exist amongst the people in Maycomb . To kill a Mocking Bird is more then a book about racism it is about accepting people for who they are. Through out the novel we see how prejudice leads to discrimination. We see how people prejudice because they fear something that is different. 1 ...read more.