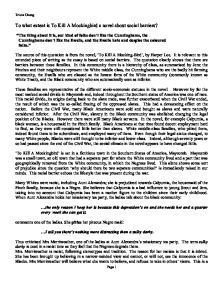 To what extent is To Kill A Mockingbird a novel about social barriers?

To what extent is To Kill A Mockingbird a novel about social barriers? "The thing about it is, our kind of folks don't like the Cunninghams, the Cunninghams don't like the Ewells, and the Ewells hate and despise the coloured folks." The source of this quotation is from the novel, 'To Kill A Mocking-Bird', by Harper Lee. It is relevant to this extended piece of writing as the essay is based on social barriers. The quotation clearly shows that there are barriers between these families. In this community there is a hierarchy of class, as summarised by Jem: the Finches and their neighbours represent the White middle class, the Cunninghams who are the badly hit farming community, the Ewells who are classed as the lowest form of the White community (commonly known as White Trash), and the Black community who are automatically seen as inferior. These families are representative of the different socio-economic statuses in the novel. However by far the most marked social divide in Maycomb and, indeed throughout the Southern states of America was one of race. This racial divide, its origins dating back to the slave trade, was further exacerbated when the Civil War ended, the result of which was the so-called freeing of the oppressed slaves. This had a devastating effect on the nation. Before the Civil War, many Black Americans were sold and bought as slaves and were naturally considered inferior. ...read more.

This shows how distinct the divisions are. You either have to be one or the other. Because the two races, Whites and Blacks, will not accept each other, they will not accept anyone if they have the smallest interest in the opposite race. As well as a racial divide, there are many social divides in Maycomb. Arthur Radley was not Black but he and the rest of his family were very isolated. This is because the Radley family "kept to themselves", an idiosyncrasy that was unforgivable in Maycomb. They did not go to church on Sundays but worshipped at home. "The shutters and doors of the Radley house were closed on Sundays, another matter alien to Maycomb's ways". After an incident with the police, Arthur Radley was not seen for the next fifteen years. A rumour spread that he tried to kill his father and was soon feared by the children. He was imprisoned and alone. The barriers that are put up for Arthur Radley make it difficult for him to interact with the other characters. This is epitomised by the fear that everyone has of him and a major physical barrier, the house. Wonder what he looks like?. asks Dill, giving a sense of ambiguity and mystery that surrounds the Radley family. Not one person has, according to rumour entered the house. Arthur Radley seems to isolate himself from the others. From this the Radley family has made themselves known to be loners, even when Scout and Jem attempted to speak to Mr. ...read more.

It has made us see that the Negroes aren't what the Whites had thought they are. In fact we see a more caring and gentle side to the Black community. In 'To Kill A Mockingbird', there are a lot of racial inequalities, however the author has cleverly used this fact to give out a positive effect. The White race was thought to be at the top of the hierarchy and that they were superior in all cases. Theoretically this is true, however the Ewell family was portrayed to be no different to the Negroes. And as we read through this novel, we sense that each character holds the potential in a playing a part to break down these barriers. As stated, baby steps are the paths of having hope. "All animals are equal but some are more equal than others" Animal Farm, George Orwell. We are able to relate this quotation to the idea of equality within the human race. Even though the Blacks have been removed from a life of slavery, they still did not have the same opportunities as the Whites. Their status has changed but the short-term effect was not dramatic. In the long run, as time progressed, the attitudes and trends of people changed. 'To Kill A Mockingbird' is at the early stages of this, and has realistically shown minute changes of breaking down these social and racial divides. I feel that after reading 'To Kill A Mockingbird' I have learnt that if every individual put their differences aside, there would be no barriers at all. Tricia Chong Page 1 ...read more.