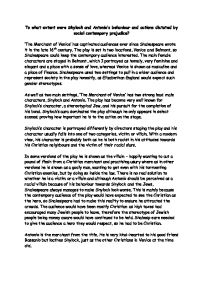 To what extent were Shylock and Antonios behaviour and actions dictated by social contempory prejudice?

To what extent were Shylock and Antonio's behaviour and actions dictated by social contempory prejudice? 'The Merchant of Venice' has captivated audiences ever since Shakespeare wrote it in the late 16th century. The play is set in two locations, Venice and Belmont, so Shakespeare could keep the contempory audience interested. The main female characters are staged in Belmont, which I portrayed as homely, very feminine and elegant and a place with a sense of love, whereas Venice is shown as masculine and a place of finance. Shakespeare used two settings to pull in a wider audience and represent society in the play honestly, as Elizabethan England would expect such gender stereotypes. As well as two main settings, 'The Merchant of Venice' has two strong lead male characters, Shylock and Antonio. The play has become very well known for Shylock's character, a stereotypical Jew, and his pursuit for the completion of his bond. Shylock's aura dominates the play although he only appears in select scenes; proving how important he is to the action on the stage. Shylock's character is portrayed differently by directors staging the play and his character usually falls into one of two categories, victim or villain. With a modern view, his character is probably both as he is both racist in his attitudes towards his Christian neighbours and the victim of their racial slurs. ...read more.

A modern audience watching the play today would be able to draw on their knowledge of the Holocaust and this would lead them to seeing Shylock as a victim, empathizing with him and showing sorrow, whereas the audience watching the play in the 1500's would see Shylock as the villain in the drama. They would hate him for trying to make Antonio, the Christian, complete the bond. This leaves Antonio to be seen as the victim as the audience did not care for Shylock and his suffering, they were not able to understand his point of view. This shows just how much of their behaviour and attitudes was dictated by social, contempory prejudice. Shakespeare was very deliberate in his creation of Antonio, as he had to be completely different to Shylock. He is portrayed as a gentleman who is well settles within his friendship group, especially Bassanio, and also as a merchant but may worry; "You have too much respect upon the world" (Act 1, Scene 1) which suggests Antonio is concerned with how people see him and presents him as desiring 'respect' from his peers. In his social group he has a very high standard and is also wealthy, although his money was all at sea, forcing him to borrow money from Shylock and take out the bond, he still remains the hero figure. ...read more.

Antonio embodies Christianity in Venice. He is a noble merchant with a high status. He and his fellow Christians strongly oppose Jews and show racism throughout the play. Behaviour like this towards the Jews was a norm for Christians at the time, so Antonio along with them acted upon these prejudices. Shylock also did this when Antonio came to him to borrow money; Shylock saw his chance to get even and took it. When it came to the court scene he was offered money instead of the bond but decided not to take it, just to get even at Antonio and the Christians. Unfortunately for Shylock he was persecuted for his actions while Antonio, who escaped because he was made out to be righteous and the audience supported his due to his religion. Perhaps the most disturbing aspect of the drama filled court scene would be the added racism of Antonio's punishments for Shylock. Shakespeare cannot allow Shylock to be successful, so he strips him of his money and his religion. The drama on the stage here would have pleased his audience but in the modern day, would go completely against his human rights and would not have been justified. Both characters showed the prejudices in the main plots of the play, dictating the storyline. The main social prejudices were that to do with religion, so Antonio and Shylock belonging to different religions made the social contempory prejudice stand out strongly and control the play. ...read more.