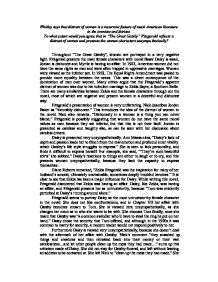 To what extent would you agree that in &quot;The Great Gatsby&quot; Fitzgerald reflects a distrust of women and presents the women characters unsympathetically?

Whitley says that distrust of women is a recurrent feature of much American literature in the twenties and thirties. To what extent would you agree that in "The Great Gatsby" Fitzgerald reflects a distrust of women and presents the women characters unsympathetically? Throughout "The Great Gatsby", women are portrayed in a very negative light. Fitzgerald presents the main female characters with moral flaws: Daisy is weak, Jordan is dishonest and Myrtle is having an affair. In 1922, American women did not have the same rights as men and were often trapped in oppressive marriages. Women were viewed as the inferior sex. In 1923, The Equal Rights Amendment was passed to provide more equality between the sexes. This was a direct consequence of the domination of men over women. Many critics argue that the Fitzgerald's apparent distrust of women was due to his turbulent marriage to Zelda Sayre, a Southern Belle. There are many similarities between Zelda and the female characters through out the novel, most of which are negative and present women in a deceitful and dishonest way. Fitzgerald's presentation of women is very unflattering. Nick describes Jordan Baker as "incurably dishonest." This introduces the idea of the distrust of women in the novel. Nick also remarks, "Dishonesty in a woman is a thing you can never blame." ...read more.

Nick's comment "they smashed up things and creatures and then retreated back into their money or their vast carelessness...and let other people clean up the mess they had made..." sums up this criticism made of Daisy. She did not stay for Gatsby funeral, and left without leaving an address to be contacted at. She left Nick to "clean up the mess they had made." She also says to Gatsby, "I'd like to get you in one of those pink clouds and put you in it and push you around." This suggests that she wants to escape with Gatsby, without letting Tom find out. Daisy's inability to take responsibility for her actions leads to the mistrust Fitzgerald has been reflecting throughout the novel. Myrtle Wilson can be viewed unsympathetically. She is having an affair with Tom, and has hopes of leaving Wilson. She can be viewed unsympathetically, because she seems able to use any means possible to get on the world, including sleeping with another man. This could symbolise Fitzgerald's criticism of the "American Dream" gone wrong in the novel. Fitzgerald reflects distrust in women, because Wilson said, "I told her she might fool me, but she won't fool God." ...read more.

That's the best thing a girl can be in this world, a beautiful little fool." Daisy is presenting her boredom with life, and suggests a girl can have fun if she is attractive, yet simplistic. This creates sympathy for women, because Fitzgerald understands their position and lack of power. Jordan Baker has sympathy created for her. In some ways, Jordan is an anachronism for women at this time. She symbolises the new wave of women emerging in the twenties. Jordan is hard working and self sufficient, she has a masculine name, and also she is described as having an "athletic and boyish" figure. Sympathy is created for Jordan, because she doesn't quite fit in with this era of women. In conclusion, to a very large extent I agree that Fitzgerald reflects a distrust of women. Many argue that this is due to his turbulent marriage with Zelda. Fitzgerald has indirectly blamed two major female characters for the death of the "Great Gatsby" that being Myrtle and Daisy. He has portrayed female characters in a deplorable way throughout the novel. However, it can be noted that the depiction of female characters isn't completely negative. Fitzgerald is able to instil readers of the somewhat harsh realities of life for women in the 1920s, and he is able to capture the restless, materialistic and defiant atmosphere of the post-war era. ...read more.