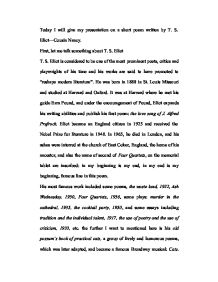 Today I will give my presentation on a short poem written by T. S. Eliot-Cousin Nancy.

Today I will give my presentation on a short poem written by T. S. Eliot-Cousin Nancy. First, let me talk something about T. S. Eliot T. S. Eliot is considered to be one of the most prominent poets, critics and playwrights of his time and his works are said to have promoted to "reshape modern literature". He was born in 1888 in St. Louis Missouri and studied at Harvard and Oxford. It was at Harvard where he met his guide Ezra Pound, and under the encouragement of Pound, Eliot expands his writing abilities and publish his first poem: the love song of J. Alfred Prufrock. Eliot became an England citizen in 1925 and received the Nobel Prize for literature in 1948. In 1965, he died in London, and his ashes were interred at the church of East Coker, England, the home of his ancestor, and also the name of second of Four Quartets, on the memorial tablet are inscribed: in my beginning is my end, in my end is my beginning, famous line in this poem. His most famous work included some poems, the waste land, 1922, Ash Wednesday, 1930, Four Quartets, 1936, some plays: murder in the cathedral, 1935, the cocktail party, 1950, and some essays including tradition and the individual talent, 1917, the use of poetry and the use of criticism, 1933, etc. the further I want to mentioned here is his old possum's book of practical cats, a group of lively and humorous poems, which was later adapted, and became a famous Broadway musical: Cats. ...read more.

step should walks with grace and elegance, here Nancy ignored the traditional way of women's manner, which give us the first impression of Nancy-a real new woman. break should be pay more attention, I think break here means to force or make a way through, the repetition of "break" indicated Nancy's attitude toward tradition, her unceasing rebellion. It is obvious here that her masculine behavior-such as hunt over the pasture, strode across the hills, showed her desire for equal to man. So if we just understand from the literal meaning of those words just as what I've done, we easily draw a conclusion that Nancy is a new woman, courageous and resolute, with spirit of liberation and rebellion. But when we think it further, we find something more, (reread it)"strode...broke them", this two lines give us an imagination of such kind of England's green and pleasant land, with the heroine's movement. But quickly the following line ironically deflated our romantic expectations by use the word "barren", here barren may suggest the cultural deficiency of the New England. (Why do I draw this conclusion? The landscape of New England can be a symbol of its cultural environment, and that is what Nancy want to strode across and broke) Just as the poet once summarized cultural gentility by saying that "the society of Boston was and is quite uncivilized but refined beyond the point of civilization". The imposition of modernity on such kind of blank landscape, more or less demean image of our heroine here, and give the tone of irony. ...read more.

In my opinion, the modern and the tradition is not a kind of contrast, but consistent in the process of time, the tradition, or the deep cultural roots, is unalterable one, any rebellion form of modern is ephemeral, and I think that any modern will be a part of tradition, one day, Nancy, will also become the bust on the shelf, just like Arnold, or Emerson. So will you and me. Q: Do you notice the final stanza introduced a note peculiar? The diction of this final pentameter is at odds with that of the rest of the poem. And do you think whether this field of reference aggrandizes or trivializes Nancy's "modern" rebellion? "The barren New England hills" with "upon the glazen shelves kept watch" Q: if we considered the New England hills as the symbol of the traditional culture, why is it barren? And why are shelves glazed? Maybe a kind of objective observation here, since the shelves of Nancy's family are really glazed, or we can say that the tradition is well kept, though antique, locked away in the shelves. (The need for an "impersonal" or objective poetry in which the life of the writer is dissolved into his art) In the title of the volume, "observation" indicated the writing technique, the purpose of the poems, and also the attitude of the poet, he observe, like an objective spectator, observing everything, forever observing, includes himself in the observation, and wrote down what he observed into his poems. ...read more.