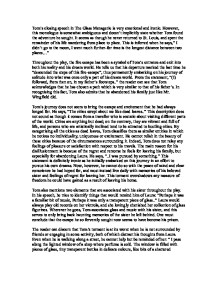 Tom's closing speech in The Glass Menagerie is very emotional and ironic. However, this monologue is somewhat ambiguous and doesn't implicitly state whether Tom found the adventure he sought. It seems as though he never returned to St. Louis, and spent the remainder of his life wandering from place to place. This is inferred when he says," I didn't go to the moon, I went much further-for time is the longest distance between two places..." Throughout the play, the fire escape has been a symbol of Tom's entrance and exit into both his reality and his dream world. He tells us that his departure marked the last time he "descended the steps of this fire-escape", thus permanently embarking on his journey of solitude into what was once only a part of his dream world. From the statement, "(I) followed, from then on, in my father's footsteps.." the reader can see that Tom acknowledges that he has chosen a path which is very similar to that of his father's. In recognising this fact, Tom also admits that he abandoned his family just like Mr. ...read more.

This torment overshadows any measure of freedom he could have gained as a result of leaving his home. Tom also mentions two elements that are associated with his sister throughout the play. In his speech, he tries to identify things that would remind him of Laura: "Perhaps it was a familiar bit of music, Perhaps it was only a transparent piece of glass.." Laura would always play old records on her victrola, and she lovingly cherished her collection of glass figurines. Wherever he goes, Tom associates glass and music with his sister, and this serves to only bring back haunting memories of the sister he left behind. One must conclude that the escape he so fervently sought now seems to have become his prison. The reader can discern that Tom's torment is at its worst when he is not surrounded by friends or engaging in some activity, both of which distract his thoughts from Laura. Even when he is walking along a street, he cannot help but be reminded of her: " I pass along the lighted window of a shop where perfume is sold. ...read more.

When Laura blows out the candles, it signifies the end to any hope that she could have a happy life. She and her mother must now fend for themselves. Laura must always live in the shadow of her brother's escape, and she will most likely carry this pain for the rest of her life. It also symbolises Tom's final farewell to her. Essentially, this monologue reveals that Tom's escape has not been as complete or as perfect as he had hoped. While he has escaped the physical limitations of the Wingfield apartment and the restrictions of his job at the warehouse, memories from his past and feelings of regret seem to create an intangible prison for Tom. He has been unable to remove himself from the coffin and leave all the nails untouched, as was his former desire. His statement of "I am more faithful than I intended to be!" alludes to the fact that he is fully cognisant that he has left his family to struggle with the consequences of his departure. The Glass Menagerie ends with Tom's life being exactly opposite to the one he had foreseen when he planned his escape. ...read more.