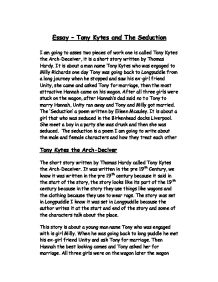 Tony Kytes and The Seduction

Essay - Tony Kytes and The Seduction I am going to asses two pieces of work one is called Tony Kytes the Arch-Deceiver, it is a short story written by Thomas Hardy. It is about a man name Tony Kytes who was engaged to Milly Richards one day Tony was going back to Longpuddle from a long journey when he stopped and saw his ex-girl friend Unity, she came and asked Tony for marriage, then the most attractive Hannah came on his wagon. After all three girls were stuck on the wagon, after Hannah's dad said no to Tony to marry Hannah, Unity ran away and Tony and Milly got married. The 'Seduction' a poem written by Eileen Mcauley. ...read more.

This story is about a young man name Tony who was engaged with is girl Milly. When he was going back to long puddle he met his ex-girl friend Unity and ask Tony for marriage. Then Hannah the best looking comes and Tony asked her for marriage. All three girls were on the wagon later the wagon goes out of control and all three girls fall off. Hannah said no to Hannah to marry Tony, he asked Unity and she said no then he asked Milly and she said yes. Tony lies in the story because he does not want to hurt the three women because in the pre 19th century men cared a lot about woman. ...read more.

The boy was ready to seduce the girl because in the party he had Listerine in his pocket because his breath smelt like nicotine. He abuses himself by skipping school and carries paint thinner for abusing himself and he carries his dad's pornographic magazines. The boy and the magazines betrayed the girl The girl rips up the Jackie photo comics and Mr Guy magazines in to confetti (small paper thrown in weddings). She breaks her shoes because she wore them on the night when she was seduced. The colour white symbolises purity and innocent and the boy seduced an innocent girl. She is sad because she is having and baby when she is young and people will judge her that she is having a baby. Before men were respectful to women but in the 1980's men don't care for women. ...read more.