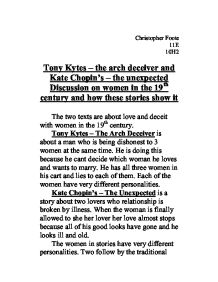 Tony Kytes - the arch deceiver and Kate Chopin's - the unexpected - Discussion on women in the 19th century and how these stories show it.

Christopher Foote 11E 10H2 Tony Kytes - the arch deceiver and Kate Chopin's - the unexpected Discussion on women in the 19th century and how these stories show it The two texts are about love and deceit with women in the 19th century. Tony Kytes - The Arch Deceiver is about a man who is being dishonest to 3 women at the same time. He is doing this because he cant decide which woman he loves and wants to marry. He has all three women in his cart and lies to each of them. Each of the women have very different personalities. Kate Chopin's - The Unexpected is a story about two lovers who relationship is broken by illness. When the woman is finally allowed to she her lover her love almost stops because all of his good looks have gone and he looks ill and old. ...read more.

He looks ill and old so her love may have been based on looks. The writer opinions of the women in the 19th century were that they were out for a marriage more than love so that they could just move out of their parents and live out on their own or with a lover. The writers approach is sexual and physical attractions by not talking bluntly about it just phrasing things in a way that makes the reader think about it etc. The words used are very persuasive and clever. In the unexpected there is a lot of passion from Dortethea at the start but is quickly reduced through the story with seeing her lover after his illness. She has barely any passion after she see him because he looks so bad. All the women in the stories want one thing, money. ...read more.

Randall offers her money to stay with her, she considers this and it gets her attention very quickly. This is another example of what I think women were really after in the nineteenth century. All Together I think that women in the nineteenth century were all after the same thing, money. They all look and act different on the outside but the truth in my mind is that all they wanted was a lot of money which would keep them happy for the rest of their lives. They would marry anything for money and then have little flings with handsome men who just had looks. To a modern reader (i.e. me) the stories seem that the women just were out for money not love, and the women were a bit ruthless to get money. Cheating and persuasive language. I think that the women main goal in life was to get marred so that they can leave home and have money. ...read more.