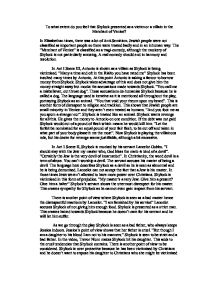 Towhat extent do you feel that Shylock presented as a victim or a villain in the Merchant of Venice?

To what extent do you feel that Shylock presented as a victim or a villain in the Merchant of Venice? In Elizabethan times, there was a lot of Anti-Semitism. Jewish people were not classified as important people so there were treated badly and in an inhuman way. The "Merchant of Venice" is classified as a tragi-comedy, although the mockery of Shylock is not particularly amusing. A real comedy should end in harmony and resolution. In Act I Scene III, Antonio is shown as a villain as Shylock is being victimised. "Many a time and oft in the Rialto you have rated me" Shylock has been insulted many times by Antonio. At this point Antonio is asking a favour to borrow money from Shylock. Shylock takes advantage of this and does not give him the money straight away but mocks the accusations made towards Shylock. "You call me a misbeliever, cut throat dog". These accusations de-humanise Shylock because he is called a dog. The language used is iterative as it is mentioned all throughout the play, portraying Shylock as an animal. "You that void your rheum upon my beard". This is another form of disrespect to religion and tradition. This shows that Jewish people are small minority in Venice and they aren't even treated as humans. ...read more.

He just wishes she was dead and she had his money with her. The quote also sends an image of the brutal and villainous side of Shylock as he wants his own daughter dead. This shows his ongoing disrespect that he has as seen with his servant Lancelot. Shylock is often made fun of a lot by the Christians. He is never taken seriously. "As the dog Jew did utter in the streets: My daughter! O my ducats! O my daughter!" They mock the fact he has lost his only family and a lot of money. The animal image that Shylock is described as is effective, because humans don have as much respect for animals as they do for humans. This is iterative imagery. This image is repeated many times. In Act 3 Scene I Shylock is seen as a more a victim but also a villain. "He hath disgraced me, and hindered me half a million, laughed at my losses, mocked at my gains, scorned my nation..." He is mocked and thought of as inhuman. This shows how victimised he is. Commas are used in this text to list all the problems Jews have faced and it is effective as it shows his never-ending list of grief he has suffered. He shows his villainous side when he says he wants revenge. ...read more.

He does not fit in with the Christians as they still treat him like a Jew. They still refer to him as an animal and Shylock is not seen as a normal human being. Jessica had been locked up in the house and she was isolated. Shakespeare had turned the table round and Shylock became isolated. There is another person who lives in isolation at the end of the play. That person is Antonio. His homosexual tendencies were not fulfilled by Bassanio as he is married to Portia, as seen in the video. Antonio found out that his ships were safe. The play is interpreted in different ways. We can see Shylock as either a victim or a villain as asked in the title of this essay. Shylock has been victimised a lot by the Christians and he acts villainously. He tries to do the bad things to Christians which they have done to him. All he wants is revenge. But he is just one man fighting for freedom and he could be respected if a lot of Jewish people at that time follow in his footsteps, so he can be seen as a brave victim of this religious conflict. The message of the play is "The villainy you teach me, I will execute!" The whole plot of the play revolves around revenge. Shakespeare points out that revenge must be taken for the cause of justice. ...read more.