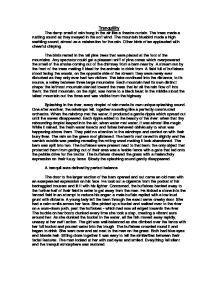 Tranquility. The damp smell of rain hung in the air like a theatre curtain. The trees made a rustling sound as they swayed in the soft wind.

The damp smell of rain hung in the air like a theatre curtain. The trees made a rustling sound as they swayed in the soft wind. The mountain bluebird made a high warbling sound, almost as a celebration for the rain. Other birds often applauded with cheerful chirping.

The birds rested in the tall pine trees that were placed at the foot of the mountains. Any spectator could get a pleasant sniff of pine cones which overpowered the smell of the smoke coming out of the chimney from a barn near by. A stream ran by the front of the trees making it ideal for the animals to drink from. A field full of buffaloes stood facing the woods, on the opposite side of the stream; they were rarely ever disturbed as they only ever had two visitors. The lake continued into the distance, to its source, a valley between three large mountains. Each mountain had its own distinct shape: the leftmost mountain slanted toward the trees that let all the rain flow off into them; the third mountain, on the right, was home to a black bear; in the middle stood the tallest mountain out the three and was visible from the highway.

Splashing in the river, every droplet of rain made its own unique splashing sound. One after another, the raindrops fell, together sounding like a perfectly constructed orchestra. When the raindrop met the water, it produced a gentle ripple which spread out until the waves disappeared. Each ripple added to the beauty of the river: when that tiny rebounding droplet leaped into the air, when water met water, it was almost like magic. While it rained, the fresh water insects and fishes behaved obliviously to what was happening above them. They paid no attention to the raindrops and carried on with their busy lives. The rain on the green roof glistened. The barn’s roof caved in slightly and the varnish outside was peeling revealing the rotting wood making it look abandoned. The barn was split into two. The buffaloes were present next to that barn; the only object that protected them from getting out of their area was a feeble fence with a gate that led onto the pebble drive for the tractor. The buffaloes chewed the grass with a melancholy expression on their fuzzy faces. Slowly the splashing sound gently disappeared.

The door to the larger section of the barn opened and out came an old man with an exasperated expression on his face. He took out a cigarette from the pocket of his bedraggled trousers and lit it with his lighter. Concerned, the buffaloes backed away to the further half of their field in order to get away from the man. He kicked a stone into the fenced field in an attempt to reduce his anger; a male buffalo replied with a low loud grunt with distaste. A young lady left the barn through the exact same creaky door. She had a calm smile across her face. She picked up a bucket and walked over to the river on a worn-down path, past the buffaloes - which had now all edged towards the river. The buckle on her boots clunked every time she took a step, creating a vibrant aura around her. As she dunked the bucket in the water, all the fish moved away rapidly, uneasy at her swift action. The girl was well-balanced as she climbed over the fence with her full bucket and poured water into the trough. The buffaloes crowded round it and began to drink. She went over and sat next to the man on the grass. Both had blue eyes and blonde hair. Sitting close together it was easy to tell the similarities between their facial features. The man looked at her with sad eyes and smiled. Everything fell silent and the tranquil atmosphere was restored.