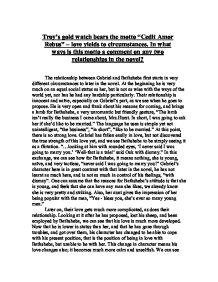 Troy&amp;#146;s gold watch bears the motto &amp;#147;Cedit Amor Rebus&amp;#148; &amp;#150; love yields to circumstances. In what ways is this motto a comment on any two relationships in the novel?

Troy's gold watch bears the motto "Cedit Amor Rebus" - love yields to circumstances. In what ways is this motto a comment on any two relationships in the novel? The relationship between Gabriel and Bathsheba first starts in very different circumstances to later in the novel. At the beginning he is very much on an equal social status as her, but is not as wise with the ways of the world yet, nor has he had any hardship particularly. Their relationship is innocent and na�ve, especially on Gabriel's part, as we see when he goes to propose. He is very open and frank about his reasons for coming, and brings a lamb for Bathsheba, a very unromantic but friendly gesture, "The lamb isn't really the business I came about, Mrs.Hurst. In short, I was going to ask her if she'd like to be married." The language he uses is simple yet not unintelligent, "the business", "in short", "like to be married." At this point, there is no strong love. Gabriel has fallen easily in love, but not discovered the true strength of this love yet, and we see Bathsheba to be simply seeing it as a flirtation. "...looking at him with rounded eyes, 'I never said I was going to marry you.' 'Well-that is a tale!' said Oak with dismay." In this exchange, we can see how for Bathsheba, it means nothing, she is young, na�ve, and very tactless, "never said I was going to marry you!" ...read more.

She obviously does not feel happy about this, which displays to us that the nature of her love has changed to become true love, deeper than the love she had for Troy. This event of him telling her about his plan to leave ultimately sparks off her new and greatest love. She finally realises that he is the 'man for her', and as her character becomes so, her love becomes much more mature and settled. " 'Marrying me! I didn't know it was that you meant,' she said, quietly." this is a vast contrast with her love with Troy, which was shown to always be hurried, as if she was pushed and forced into decisions. Bathsheba's relationship with Troy is very different. The main cause of these differences is Troy's character, which is naturally superficial and fickle. We see this as the novel progresses. Troy first meets Bathsheba by accident. The meeting is at night, which makes it easier for Troy to trick Bathsheba's mind, as he appears to do. Throughout their conversation, he annoys her, "I tell you you have! She exclaimed in high temper." Bathsheba's natural fiery and independent character comes in here, but he manages to overrule it, as we see from her reaction at the end of the chapter, "to skulk away like that from a man who was only being civil and kind!" From this first meeting, and the thoughts it causes her, one immediately sees the falseness of their relationship. ...read more.

Fanny's death causes Troy to become overly cruel towards Bathsheba, and appears to be greatly sorrowed, saying to his wife, "This woman is more to me, dead as she is, than you ever were, or are, or can be." From this, and from his actions dealing with Fanny's death, we see that his love for her was indeed a lot deeper than that which he had with Bathsheba. However, from earlier events which I have already explored, I think that Troy was indeed in love with Bathsheba, but this event has brought to light how much he actually loved Fanny, but didn't realise it. It also obliterates all love he my have had for Bathsheba, displaying again the fickleness of his love; it is undone that quickly. We can see that both Troy and Oak are very strong about love, but they succeed with this in different ways. While the change in circumstances and the widening of the social gap between him and Bathsheba encourage Oak's love, and he copes with the various circumstances obstructing his love, Troy does not manage to do this. Instead, he shies away from any responsibility of his involving Bathsheba, and uses all circumstances as much to his own advantage as possible, therefore not allowing his love to grow and become stronger, which ultimately results in both his relationships failing. However he does manage to be strong with love because of his trickery and cunning, he always keeps the upper hand in a relationship, even when circumstances cause his feelings to change abruptly. ...read more.