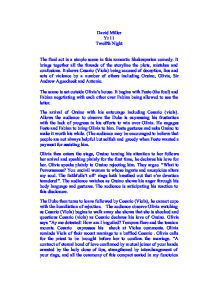 David Miller Yr 11 Twelfth Night The final act is a simple scene in this romantic Shakesperian comedy. It brings together all the threads of the storyline the plots, mistakes and confusions. It shows Cesario (Viola) being accused of deception, lies and acts of violence by a number of others including Orsino, Olivia, Sir Andrew Aguecheek and Antonio. The scene is set outside Olivia's house. It begins with Feste (the fool) and Fabian negotiating with each other over Fabian being allowed to see the letter. The arrival of Orsino with his entourage including Cesario (viola). Allows the audience to observe the Duke is expressing his frustration with the lack of progress in his efforts to win over Olivia. He engages Feste and Fabian to bring Olivia to him. Feste gestures and asks Orsino to make it worth his while. (The audience may be encouraged to believe that people are not always helpful but selfish and greedy when Feste wanted a payment for assisting him. Olivia then enters the stage, Orsino turning his attention to her follows her arrival and speaking plainly for the first time, he declares his love for her. ...read more.

On seeing Ceserio he accuses him of causing the injuries Cesario again denies the accusation made against him not Knowing that Sir Andrew is mistaking Cesario for Sebastian. Sir Andrew says of Cesario "He is the very devil incordinate." Temporarily the focus of the story is shifted away from Orsino and Cesario to Sir Andrew and Cesario. As Cesario attempts to defend himself Sebastian appears calling to Antonio who is bewildered he cannot believe his own eyes he thought he was seeing double he asks "Have you made divisions of yourself an apple cleft in two is not more twin than those two creatures. Sebastian gestures that he to be baffled he has seen a mirror image of himself but he had never had a brother only a sister. (The audience knows that Cesario is really a girl dressed as a man being played by a man this adds to the humour of the piece. The audience has anticipated the response when the twins met during the previous four acts when cesario has been taken for Sebastian and visa versa and the trouble that has caused. ...read more.

In the closing moments, the story lines one by one conclude. Orsino declares his love for Cesario when he realises that Cesario is really a woman. In such a short space of time, he transfers his emotion from one of love for Olivia to one of murder and back to love. The audience would be shown how Orsinos supposed love of Olivia could not have been that strong if he could transfer his love to another in a moment. Orsinos love for Olivia was in fact a possessive, unrequited and self indulgent type of love. Olivia had given him no encouragement but he was angry when she did not respond the way he expected which just goes to show how arrogant he was. Orsino's newly found love for Viola could be considered to be suspicious it would seem more about sexual availability. Violas love for Orsino seems ironic that such an intelligent level headed woman should fall for this fickle man, perhaps Viola should be pitied. In conclusion, as the threads of the play come together the audience can see how love can take many different forms and how obstacle can be overcome. ...read more.