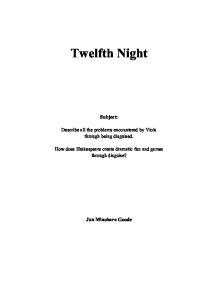 Twelfth Night Subject: Describe all the problems encountered by Viola through being disguised. How does Shakespeare create dramatic fun and games through disguise? Jun Minohara Goode 'Disguise, I see thou art a wickedness', Viola breathes futile sighs, without knowing what to do. It is an irony: To solve a problem, she disguised as a eunuch = a man, yet she found herself in a middle of problems. When she drifts to a foreign land, Illyria, after meeting shipwreck, she decides to disguise herself as a man. Being a man, she thinks she can avoid most of problems. Conceal me what I am, and be my aid For such disguise as haply shall become The form of my intent. (Act one Scene 2 line 52) However, hiding her identity, the gender creates a sequence of problems. The problems have become tangled each other, weaving an elaborate story. The story is full of contradictions, duplicated hidden meanings, ironies and paradoxes, which make rich layers of the story of the Twelfth Nights. The main problem for Viola through being disguised is a love triangle, from which a sequence of problems is derived. Olivia, falls in love with Viola-Cesario, without knowing she is a woman. Viola-Cesario secretly adores Orsino, Duke of Illyria. Orsino is obsessed with Olivia. However, we don't know if Orsino really loves Olivia or if he just exaggerates his love, because we don't see them together in the stage until the concluding scene. ...read more.

This love triangle affair generates life-threatening problems. Sir Andrew, who fancies Olivia is set for duel with Viola-Cesario by Sir Toby, a supposed-friend of Sir Andrew and Fabian, a servant of Olivia. Sir Andrew is toying with an idea being a husband of Olivia, yet he never told of true his feelings towards Olivia. The naughty guys persuade Sir Andrew to challenge Viola-Cesario to a duel and so win Olivia's affection by his bravery. Viola-Cesario desperately tries to avoid the duel, and later Sir Andrew is equally frightened and tries to call off the duel. Yet, Sir Toby forces them to draw swords. At this point, the atmosphere of the theatres would have been increasingly tense and most audience would have cursed about an irony of Viola's double-life and prayed for saving her life. All of a sudden, Antonio enters and intervenes the duel on the Viola's behalf. Antonio is the rescuer of Sebastian, Viola's twin brother during the shipwreck and he worships Sebastian. Antonio has mistaken Viola for Sebastian in life-threatening trouble. With Antonio's intervene, the duel is ceased. Soon after, two officers come to arrest Antonio for the old sea-battle with Orsino's army. Antonio asks to give back a purse that she entrusted Sebastian with, believing that Viola is Sebastian. Viola says that she has never received the purse but can lend some money. She also mentions that she has never met Antonio before. ...read more.

Olivia feels confused about her own feelings; who does she really love? After that, she never address her love towards Sebastian, yet accepted him as her husband. Orsino shows his interest in Viola, though he is not fully sure that he would be fond of Viola in woman dress, a possible admission of doubt? Give me thy hand; And let me see thee in thy woman's weeds. (Act five scene 1 line 265) As the story nearly ends, the problems encountered by Viola through being disguised seem to be creating future problems. This is a great paradox: Viola and Viola as a man is the same person, yet different personality. Because a personality is always described how a third person sees and understands it, and how it largely effects on person's judgement. Orsio and Viola are to marry. Olivia offers to have a celebration together with her marriage at her expense. Orsio accepts it. However, what is going to happen in their respectable marriages? Because Orsio and Olivia don't know who they have fallen into love. The essay only focused on the problems related with Viola, although there is a sub plot simultaneously happening with the main plot. In the sub plot, Sir Toby, Sir Andrew and Olivia's servant tricks Malvolio by sending a letter disguised as Olivia's love letter to him. The sub plot is narrated much more comically and hilariously, which stops the main plot from sliding into melodrama. Feste, a clown appears from time to time in the play. He talks paradoxes or ironies, which injects periodic touch of spice to the play. ...read more.