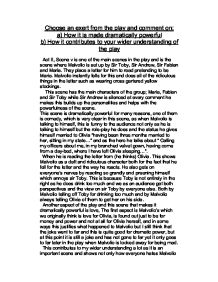 Choose an exert from the play and comment on: a) How it is made dramatically powerful b) How it contributes to your wider understanding of the play Act II, Scene v is one of the main scenes in the play and is the scene where Malvolio is set up by Sir Toby, Sir Andrew, Sir Fabian and Maria. They place a letter for him to read pretending to be Maria. Malvolio instantly falls for this and does all of the ridiculous things in the letter such as wearing cross gartered yellow stockings. This scene has the main characters of the group; Maria, Fabian and Sir Toby while Sir Andrew is silenced at every comment he makes this builds up the personalities and helps with the powerfulness of the scene. ...read more.

He also gets on everyone's nerves by reacting so grandly and preening himself which annoys sir Toby. This is because Toby is not entirely in the right as he does drink too much and we as an audience get both perspectives and the view on sir Toby by everyone else. Both by Malvolio telling off Toby for drinking too much and by Malvolio always telling Olivia of them to get her on his side. Another aspect of the play and this scene that makes it dramatically powerful is love, The first aspect is Malvolio's which we originally think is love for Olivia, is found out just to be for money and power and not at all for Olivia herself, and in some ways this justifies what happened to Malvolio but I still think that ...read more.

It also shows you how the others react with each other; Maria and Sir Toby being the ring leaders, Maria writing the letter and joining in heavily with the prank, and sir Toby having reason and also contributing to the group, with Fabian in the background and Sir Andrew being shot down at every suggestion and silenced every time he tries to talk. It gives meaning to the later part of the play where Malvolio is locked up as it shows firstly why he is locked up but also that it was not his fault and we also know who is to blame. This gives us another perspective as the audience because only we and the plotters know that it was all a joke. Although this is a joke the plotters still have their strong hate for Malvolio as seen with "Pistol him, Pistol him" and "Fie on him! Jezebel!". ...read more.