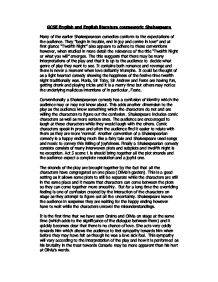 GCSE English and English literature coursework: Shakespeare Many of the earlier Shakespearean comedies conform to the expectations of the audience. They "begin in trouble, end in joy and centre in love" and at first glance "Twelfth Night" also appears to adhere to these conventions however, when studied in more detail the relevance of the title "Twelfth Night or what you will" emerges. The title suggests that there may be many interpretations of the play and that it is up to the audience to decide what genre of play they want to see. It contains both romance and revenge and there is never a moment when love defiantly triumphs. It could be thought of as a light hearted comedy showing the happiness of the festive time twelfth night traditionally was. Maria, Sir Toby, Sir Andrew and Feste are having fun, getting drunk and playing tricks and it is a merry time but others may notice the underlying malicious intentions of in particular, Feste. Conventionally a Shakespearean comedy has a confusion of identity which the audience may or may not know about. ...read more.

This sympathy will vary according to the interpretation of the play and how it is performed as his brutality in the treat towards Cersario may be more apparent than his hurt at Olivia's words. This meeting also lets the confusion of violas true identity to come to a head as Olivia announces her marriage to Cersario. Confusion reigns as viola protests that it is not the case which only serves to make Orsino angrier at her betrayal. He threatens Olivia mainly in his language by saying "I'll sacrifice the lamb that I do love to spite a raven's heart within a dove". This is a powerful rhyming couplet which will be remembered by the audience. The image of a raven typically associated with death inside a dove a symbol of peace is a contrast to when Olivia first appears on the stage and Orsino's reaction is "now heaven walks on earth". While the audience knows that Olivia married Sebastian and not viola the characters are unaware of this and the dramatic irony adds tension to the scene as the audience watch the event unfold. ...read more.

This may b Shakespeare morale for the play. The characters on stage recall malvolio who discovers that he has been tricked by Feste Maria and sir Toby. The last the audience hears of him is the threat of revenge which tarnishes the happiness just found. While the audience have felt sympathy for him before now this may turn to dislike as may be it was partly his fault that the joke happened. The scene ends with festes song the wind and the rain. He is able to make both sense and nonsense from words but a lot of what he says can be interpreted. Orsino calls him "her corrupter of words" but the song is fairly simple and creates the of picture the world being on stage. It has a distancing effect reminding the audience that the play is not real life. "Twelfth Night" begins in trouble and carries on throughout the play up until the final act and as most of his trouble is caused by love that is the centre of the play however the ending is not entirely joyous as it is mixed with despair. But as Shakespeare didn't stick rigidly to rules this still may be seen as an satisfying conclusion to the play. ...read more.